What are Limiting Beliefs?

Limiting beliefs are the chains that bind us and restrict our world view.

Like chains limiting beliefs restrict us. They become the container in which we live, filtering our view of the world through their network of ideas about ourselves, others and the world. Much of how we feel, think and behave is determined and dictated by these constraints.

We create them to stay safe and survive. Embedded in our psyche they act as our template for navigating life. Like a computer programme, once written and uploaded they faithfully carry out their functions until we change or delete them.

“It’s not the events of our lives that shape us, but our beliefs as to what those events mean.”

Not all beliefs are negative. There are plenty of things we believe which help and support us to live rewarding and satisfying lives. However, those created in adversity will more often than not diminish our experience of life. Their formation was hewn in a moment of distress, part of us is effectively frozen in time, playing the old thoughts and feelings over and over.

Let me explain with an example.

The space between me and Mum

I lived most of my life feeling like Mum didn’t like me, as if I’d done something wrong but I had no idea what. Did this limit me?

Of course it did. It was always there in the space between us. I desperately wanted to know what I had done but feared what I might find out, so I never asked.

Working on those issues

Fortunately, instead I found Matrix Reimprinting (MR) described on the website as, “a technique that connects people with their past traumas and core beliefs and elegantly enables them to transform them into supportive platforms for their lives.”

While working on “mother” issues with a therapist I suddenly had a bolt of emotion surge through me. My therapist gently used the Matrix Reimprinting techniques and questions to explore what was happening and I found myself saying:

“I’ve done something to Alastair.” Alastair is my younger brother.

As the session progressed I began to remember snippets from when I was about 4 years old. I was doing something with my new baby brother who was lying in his carry-cot.  The next thing I knew Mum was shouting at me and I did not know why. In that moment I formed my belief.

“I have done something wrong, I didn’t know what it is, but Mum doesn’t like me now” 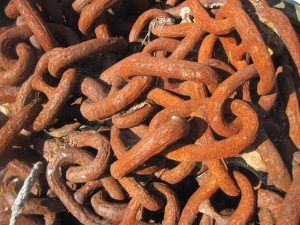 I don’t remember what I did, I doubt it was much. Maybe I tried to pick him up or perhaps I poked him and made him cry.  Whatever it was Mum, most probably, over reacted. Her lioness instinct to protect the infant over-riding everything, including how I might feel.

At 4 years old I couldn’t afford to make my Mummy wrong. We can’t do this with our parents because we are still so dependent on them. We can’t afford to see them as unsafe so instead, in that moment of shock, we make it mean something negative about ourselves or about the world in general, instead.

Too young to understand

More recently I discovered, again using Matrix Reimprinting, that I had had a similar experience even earlier in my life, when my first sister came along. I was only a year and 4 months old then and couldn’t understand why my Mum’s behaviour towards me had changed.

I was too young to grasp what was going on and the impact a second baby can have on a mother. Mum in turn did not have the knowledge or understanding to explain it to me, or to try and compensate for the impact of that change.

Instead she perceived me as difficult and jealous because I tried to get on her knee as she breast fed my new baby sister. This story and its implications followed me around for years. I believed I had been a difficult child and I did feel jealous of my sister. Now I know why.

This tale is in fact the origin of my belief about having done something wrong and Mum not liking me. The situation with my baby brother had only served to reinforce what was already embedded when my sister had arrived and the dynamics of our family changed.

This is what happen to us in life, especially when we are little. Difficult or traumatic situations occur. Our parents are often, though not always, unwitting participants in the drama with no idea about the potential implications of what has happened. If they are unable to do the repair work we end up forming limiting beliefs and integrating them into our world view. These will then, as I mentioned above, guide and steer how we travel through life.

“Once we accept our limits, we go beyond them.”

Cemented into our unconscious

As we encounter new situations with a similar theme these limited ways of seeing the world are activated and our distorted world view strengthened. With each new “confirmation” that this is “true” the belief consolidates and the neural pathways which support it grow stronger.

These ways of seeing ourselves, others and the world become cemented into our unconscious minds as automatic way of responding. Unfortunately these limiting “truths” harm us and our relationships and they also play out at a global scale driving much of the death, destruction and devastation we see on our planet.

Uncoupling from their grip

I therefore, can’t recommend highly enough that you start to understand what limiting beliefs are colouring your view of life and dictating your thoughts, feelings and behaviours. Uncoupling ourselves from their grip is one of the most liberating things we can do. It transforms how we see the world and frees us to be more authentic and who we truly are underneath all these shackles.

Our healing also has the added Radical Self Care benefit of bringing healing to all the circles of connection in which we live. When we heal ourselves we bring another little piece of healing to our  planet.

“You begin to fly when you let go of self-limiting beliefs and allow your mind and aspirations to rise to greater heights.”

Categories: Radical Self Care, Self Care