Are you feeling gagged?

Gagged by social media, gagged by the mainstream and now gagged by masks, what is going on?

Over the last few months I have been shocked by what has happened around the world. There is much to be concerned about from PPE supplies to the number of deaths.  However what I wish to address is the censoring of information, labelling people as conspiracy theorists, and the misleading information banded around by the mainstream media.

(I have included a list of links at the end of this article for those of you who are open to exploring any of these ideas in more depth.)

When I have attempted to speak about some of these issues, I have been ignored, attacked or encountered a wall of defence. The denial of anything other than the mainstream viewpoint has been quite shocking. This, coupled with an increasing unpleasantness online led me to self-gag. Although I have written tonnes recently I chose not to publish. The pervading atmosphere felt unsafe and I feared being shunned. My old feelings about being ridiculed, rejected or ostracised rose up and shut me up.

After some soul searching I have changed my mind and decided to speak my truth. After all, my professional work is about authenticity and embracing who we truly are underneath all the limiting beliefs. I need to walk my talk.

Experts in their field, who dared to question the mainstream narrative about this virus, have found themselves censored, condemned or even castigated, including world authorities. Some even went so far as to create an Independent SAGE group in the UK who believed the Government strategy “should be informed by science and debated in public, and a proper coordinated strategy for its achievement developed with the public.”

I also had information removed or marked as false on Facebook, it was against “community guidelines”. This is curious given that sharing similar information previously was fine. Facebook along with Youtube, Google and others control what information we are exposed or can find. If it challenges the mainstream medical narrative, or God forbid, the safety of vaccines, then my friends, it disappears.

Some friends and family previously condemned media outlets such as the BBC. They considered their reporting of Scottish Independence, Brexit or Climate Change to be biased. Now they seem to be following their news as verbatim. This has shocked me.

Perhaps it demonstrates the effectiveness of the Behavioural Insights team’s psychological manipulation. Their tactic of creating a climate of fear seems to have worked.  As we know fear will blank out reason. When confronted with uncertainty we clamour for safety, deleting and distorting previous knowledge as we search for a life raft to cling to.

I totally get that, I too have searched for a place of reassurance as my professional understanding about disease, health and wellbeing appears to be at odds with much of the current narrative.  Thankfully I found safety amongst my professional colleagues and others who are also questioning the whole Covid-19 narrative. 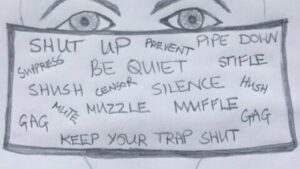 “Read not to contradict and confute, nor to believe and take for granted… but to weigh and consider.”

Sadly information which challenges the dominant narrative is being suppressed. This is worrying at anytime but especially now regarding this virus. If we cannot access a range of views how can we weigh up and consider in order to make a reasoned decision for ourselves?

One of the problems lies with the funding of mainstream media. There is a dependence on support and advertising dominated by multinational corporations, foundations, Government Departments and intergovernmental institutions. They all have agendas to fulfil, bottom lines to fund or shareholders to appease. These entities can dominate the narrative. They label those who question and offer alternatives as conspiracy theorist and seek to discredit them. Honest and open reporting has become hampered by a culture of conformity to the needs of the funders. 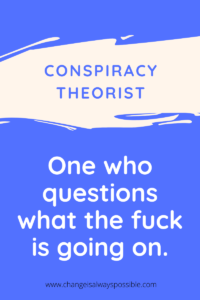 Many scientists now find themselves in a similar position. Having accepted enormous grants and awards from the same organisations their research is now potentially skewed.

Dr. Marcia Angell, a physician and longtime Editor in Chief of the New England Medical Journal tells us, “it is simply no longer possible to believe much of the clinical research that is published, or to rely on the judgment of trusted physicians or authoritative medical guidelines. I take no pleasure in this conclusion, which I reached slowly and reluctantly over my two decades as an editor of the New England Journal of Medicine.”

Sadly this applies to many of those who advise our Governments. Conflicts of interest  pollute the waters of so called independent scientific advice.

In addition, search engines and social media create echo chambers where we rattle around bumping into like minds. It becomes all too easy to band together to condemn any dissenting voices. In addition many people believe the memes created by corporate interest and share them freely without ever checking their validity or authenticity. Watch The Great Hack if you don’t believe you are being manipulated.

I believe this is creating a climate where it is harder to question, where like me, many are just keeping their heads down for fear of being attacked and hoping like hell, some sense prevails in the end.

Maybe it will, but what if it doesn’t?

Speaking out feels controversial but necessary. My work, my studies, my passion and interests all lie in empowering the individual to self heal.  I will no longer stay quiet and bow down to a  model of health which I believe is causing untold harm to the human population. Supported by political systems the pharmaceutical industry has become one of the most powerful on the planet. This is not a good thing for human health.

“We need more people speaking out. This country is not overrun with rebels and free thinkers. It’s overrun with sheep and conformists.”

In my opinion, the pharmaceutical giants and medical foundations model of health is currently pulling the decision strings. That, coupled with media driven dramas, has created an unnecessary level of terror and fear in our population.

Frightened people are easily controlled. “They” have us exactly where they need us, cowed and willing to agree to almost anything that our Governments say, without a murmur or question.

This is what I fear.

This unquestioning compliance amazes me. We appear to be loosing all sight of our own innate power to heal, to be healthy, to choose and to decide for ourselves. This is the tragedy I see and I fear.

Yes, there are those who are vulnerable and we must take good care of them. But perhaps at the same time we could also offer them another story, one of  hope. We could teach them about how others have healed or improved their conditions and offer them real health choices.

We need to evolve

Humans need to evolve and evolve fast if we hope to remain a viable species on this planet. Bowing down to the dictates of a system which created the mess in the first place seems lunacy to me. We will only get us more of the same. More destruction of our eco-systems, more pollution, more poisons in our air, water and food. All leading to even greater levels of chronic ill health especially our children.

Is this what you want?

I do not.  I believe we have to question the current paradigm which created this chaos. Our planet needs help and so do many of the world’s population. Covid-19 is not a deadly killer virus for most of us but it is a warning shot, highlighting some of the problems we need to address.

We have a pandemic of chronic ill health on our planet. People are dying not for want of medication or vaccines but because of the toxic systems we have created. Figuring out how to do things differently is essential. There is no magic pill or procedure to solve these ills.

By realigning with nature rather than continuing this story of separation we may have a chance.  Humans have thrived for millennia as part of this interconnected eco-system. It is the massive disconnection from our real place in this whole, which so threatens our survival.

Change is always possible, it requires courage, it needs support, and most of all it relies on hope.

I hope more of us who question will continue to find each other and come together. Collectively, fuelled by love, kindness and compassion we have the capacity to create a more beautiful world our hearts know is possible.

If you are questioning what is going on with Covid-19, if you have concerns and are feel gagged and in need of like minded souls please get in touch.

You are not alone.

Clinicians, Researchers, & Health Experts from Around the World Interrogating the Mainstream Narrative Around the Pandemic.

Documentary which uncovers the dark world of data exploitation.

Weekly show investigating narratives around Covid-19 and other health issues.

Series videos and articles investigating – Who is Bill Gates?

The Truth About Vaccines:

Archive of videos, interviews and articles concerned with vaccine safety.

Coronavirus in the UK.

Who is at higher risk?

Trailer for the Heal documentary.

The more beautiful world our hearts know is possible video