Lessons From A Tree, Part 1 – Life Goes On

The wound is the place where the light enters you.

Even after hearing dreadful news life goes on. For me, it was a tree helped me begin to heal.

Unable to get pregnant

Almost 20 years ago I was told that I had had Clamydia infection. It had so damaged my Fallopian tubes I was unable to get pregnant naturally.

The news that I would never conceive naturally was an enormous shock. As a female member of the human race it was never in question, I just assumed that if I wanted to I could; pregnancy, birth and motherhood were a given.

My whole world was rocked; in shock and reeling from the news I tried to stagger through each day. From waking up to going to bed life felt hard, I had to drag myself through, trying not to fall apart completely.

I just could not accept what I had been told. Stuck up this dead end I felt like there was no way out. I ricocheted around bashing myself against the walls of this news feeling more and more bruised as any hope of escape dwindled.

I just could not seem to pull myself out of despair. My very identity was being disrupted;

Something wrong with me

Driving to work each day had become an massive effort. Tears flowed as soon as I got in the car alone and I spent the journey trying to stuff it all down so I could go arrive in one piece and do my job. A job which by then felt like the most pointless and boring thing on the planet. I was going through the motions, living an empty existence.

Couple this with, what at the time, felt like my counselling practice disaster and life looked pretty bleak. I was training to be a Psychodynamic Counsellor and was supposed to be completing my 100 practice hours. Everyone seemed to be romping ahead but I just couldn’t seem to get clients or when I did, they never stayed. This only served to reinforced my feelings of failure, that nothing was right, everything was wrong, I was wrong.

One day I got stuck in traffic on the way to work. Sitting there, feeling pissed off with the whole world and how bloody unfair it was, I happened to glance out of the window.

Next to me was a tree. I could only see the bottom of the trunk and it had some huge carbuncle like growth on it. As I stared at it, I wondered what on earth had happened to make it produce such a huge growth or scar. 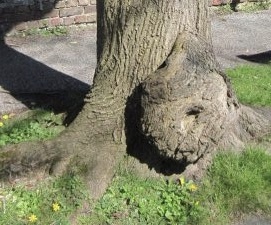 I realised I felt like that. I had real scars all over my Fallopian tubes. Like the tree with it’s wounds on view I imagined my flawed body was also on show for the whole world to see.

I know it’s illogical, but that’s what happens in trauma we don’t think in a normal way, our higher reasoning functions are not on-line.  When we feel unsafe or our survival is threatened our primitive survival mechanisms are activated. We then automatically respond with fight, flight or freeze behaviours.

I felt frozen and on display. I imagined everyone could see my horrible scars. Because they came from a sexually transmitted disease my carbuncle was ugly and disgusting, just like the one on the tree next to my car.

Something made me lean over and look up at the tree and what I saw took my breath away. Although it had this great ugly growth at it’s foot the rest of the trunk was straight and tall, leading up to a full healthy green canopy. 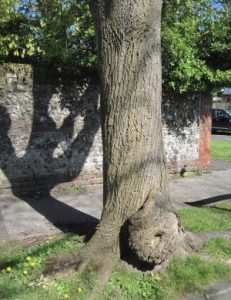 In that moment I realised that my life was not over. I was like the tree. Something horrible had happened to me, but it did not have to stop me going on to have a full and abundant human life.

That tree turned my life around.

It didn’t take away the shock, heal the trauma or change my limiting belief, but it did help me get a different perspective. My spiral into depression and suicidal thoughts, stopped.

I realised in that moment that I could go on and have a full life whether or not I had children. We don’t expire at a certain age if we don’t reproduce.  Therefore, all our lives must have value and meaning, in their own right.

It wasn’t till I found EFT (Emotional Freedom Technique) that I was able to heal the trauma and shock of that time. Then with the help of Matrix Reimprinting I was also able to tackle the limiting belief about feeling wrong.

However, I was able to go on living and to begin my long and winding journey to find out what makes life meaningful, for me.

So if you are feeling wounded, scarred or like something is wrong with you it does not need to stop you living a full life. There are ways to work with and clear the trauma, pain and emotional suffering we feel.

“Even although you may not know how,  THERE IS A WAY, you just have to find it.”

Categories: Deeply connected, Lessons From A Tree, Self Care