Why did Snowy the rabbit turn up in my tapping?

Home/Deeply connected, Self Care/Why did Snowy the rabbit turn up in my tapping?

Thankfully I have EFT tapping and Matrix Reimprinting in my life. These excellent techniques can help us move through all sorts of challenges. I recently used them to help me with issues which arose while completing the Vital Mind Re-Set Course. The dietary changes and other protocols were demanding enough, but perhaps more so was dealing with the limiting beliefs which surfaced.

During week one I felt worse not better. I hit my fears about the protocol not working and not making any more difference to my health.  The idea of giving up felt appealling. My limiting belief that  I was getting it all wrong or there was something I wasn’t doing right, so it wouldn’t work for me, had surfaced.

Fortunately, I’ve been around the belief block a few times. I recognised these particular ones for what they were, old outdated ideas I developed in the past. However they could still interfere with my present day living, hence me taking time to tap on them.

Often, when I’m teaching people about how to use EFT I talk about going on a journey. It can take us to places we never expected and that is what happened to me. I am sharing it so you know:

” Put away your skepticism, this really works….I’ve had great results with tapping in my own life.”

I started tapping about feeling worse instead of better and not believing the programme would work for me. I focused on the sensations in my body connected to those feelings and tapped and tapped. To be honest my skeptic was alive and well and I was not expecting to get anywhere. In addition to that I had an overwhelming urge to lie down and sleep. This is often a sign that I am trying to ignore an emotional issue. Thankfully I have learned through my recovery from ME/CFS to pay attention to the emotional work rather than just sleep. Giving in to the urge to lie down does not resolve anything.

When I work on myself with EFT I usually write down what I’m thinking and feeling. This time I found myself saying that I felt like I did when I was first diagnosed with ME/CFS. Obviously I’m not there now, but there was a flavour of it around,  a whisper of something calling to me.

I continued tapping asking myself what it was all about, until I got an image of myself sitting in a chair by the window when I was first unwell with CFS/ME. During that time I was having to cancel all the courses and workshops I had lined up. Using Matrix Reimprinting ( a technique which uses tapping ) I went into the memory. There I hit all the grief and heartache about giving up my life. It had felt like all the things I loved were being taken away from me. As those buried feelings re-surfaced I cried and tapped gradually releasing the suppressed emotion.  That was a painful time for me and I had obviously been carrying all this emotion alive inside myself.

It is these unresolved feelings that leak into today influencing how we feel, think and react to situations. When we find we are over-reacting or we don’t understand why we behaved the way we did,  it can be because we have triggered the energy of emotions stuck in our past. 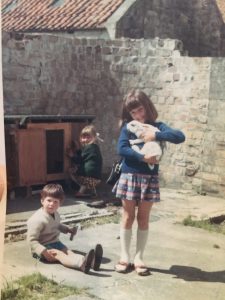 The feeling of my heat breaking was extremely strong. It seemed out of proportion to the experiences I had so I asked myself where I had felt this before. I simply tapped round the points asking where did this heart aching feeling come from?

Within minutes I had an image of my younger self when my pet rabbit Snowy died. Tears started rolling down my cheeks as I contacted the loss of my much loved rabbit. I think this was the first major loss in my life. This traumatic experience had surfaced through connecting  with a more current loss in my life. Different kind of loss, same feelings. In EFT we talk about  daisy chains of events. This is a good example of that, one event linking back to another and so on.

If you had asked me yesterday how I felt about Snowy dying I would have said fine. It was a long time ago, all in the past now. This is the power of EFT tapping, it helps us reconnect with the feelings we are still carrying around even although we may not know it. Through the tapping we are able to finally release them and let them go.

After releasing the grief I continued to tap.  Through checking in with my younger self I discovered that along side the heartbreaking loss she also felt guilty. She felt like she must have done something wrong (see the connection to the beginning now?). It was her fault Snowy had died.  She thought that there was something she should have done that would have saved her. I tapped through all of these feelings.

I still had the sense I wasn’t done, so I asked where I had learned that I had done something wrong and I got an image of my toddler self all confused about being told off. That little me had no idea what she had done wrong. Ping!!! This work is amazing.

I released all the emotion and settled into a satisfied knowing about where theses beliefs had come. As I did I also had a realisation about letting go of expectations and opening to what is. This can happen with EFT tapping. After we have released the emotion, the stress, if you like, we may have cognitive shifts.  Perhaps as our frontal lobe comes back on line our thinking mind can learn from the experience, make some meaning out of it.  I love it.

In EFT we always check and test, so I checked in with how I was now feeling about the course. I felt infinitely better. Due to the cognitive shift I realised I needed to drop my expectations about the process and just be with it. I’m was not doing anything wrong. In fact, I was definitely doing everything right in terms of what is suggested. I simply did not yet know what the end result would be.

I reflected on my younger self sitting in the chair feeling heart broken about her lost life. She did not know what riches were in store through recovering from ME/CFS.  So too, I realised I could not know what going through this current healing work would bring. So let go Mairi, the usual message!  Stop projecting, drop all expectations and just be here now, with what is.

So there you go, deciding to go on an EFT journey is an adventure which can open and release things you never even realised were still alive and affecting you today.

Start where you are today and follow the threads as they present themselves, no matter how odd or unconnected they may seem, there is healing in there for you.

You can find an EFT tapping guide here. Good luck and please let me know how you get on.

“EFT is the most powerful new transformational technology to come along in years.”