Last week I began the first of a series of excursions – Walking Loch Creran. I’ve done this before but this time I am walking in the opposite direction. I finished my previous walks three and a half years ago with Walk 17. This one retraced some of those steps but with one massive difference which I explain more about below.

Over the years I have toyed with walking the loch again but my life was full of family affairs, studies and work so I never made the time or space to do it. Instead I allowed myself to be distracted and overcommitted elsewhere and my plans kept taking a back seat. 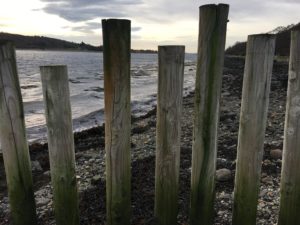 Last year my body decided to step in and start teaching me about balance. I knew from my META Health studies that breaking my ankle and then developing a strange skin condition on one foot later in the year, meant my body was talking to me. The message was clear,  I needed to create greater harmony between the things that life demands of me and the things that I am called to do in life, my passions.

I have wrestled with fully engaging in life for decades. So often life felt hugely difficult, immensely meaningless and extremely pointless. It was hard to keep going sometimes, hard to feel happy, hard to be bothered, hard to believe it would ever get better.

A million other things

Thankfully that struggle is largely behind me now, but not by luck, but by hard therapeutic work. I’ve had tonnes of it and thank God. Now I have a pretty good idea of what I want to be doing, but….

Mmmmm, embarrassing shuffle, uncomfortable wriggle…..errr, ummm. No, often I do not. As mentioned above I allow a million other things to hijack my time and then I moan about it.

Hence the walk, this is part of my newly configured approach to life where I balance work, play, passion and purpose, where I don’t just talk about doing things I actually get on with them.

Mary Oliver asks in her poem The Summer Day, “Tell me, what is it you plan to do with your one wild and precious life?”

Well amongst other things I am going to walk around the Loch again.

I decided my first walk would be from Glaceriska Bay round to the point on the north shore opposite the Isle of Eriska hotel.

It didn’t take long for my “lovely” bubble to burst. I thought I was out to delight in nature, revel in the wilderness and all that. Not so, well not initially anyway. Instead I was almost immediately consumed by the amount of plastic pollution on the beach. Washed up in the tidal seaweed strips along the bay was tonnes and tonnes of plastic,.

There were weeny wee pieces almost too small to pick up right through to huge big grey containers. I didn’t remember seeing all this last time. Was it there, 3 1/2 years ago, and I just didn’t see it, was I blind to it, or has it increased dramatically in that short time? 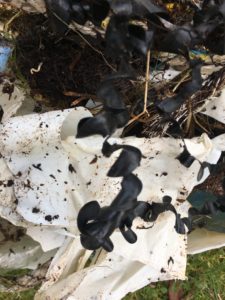 It’s true I am much more plastic-aware now especially since discovering how this beautiful loch has been polluted with black spirals of plastic. They come from the fish farm pen production on Teithil Beach. A company previously called Fusion Marine, now bought out and called GaelForce Fusion has been manufacturing fish farm pens on this beach in the loch, for years. Apparently this was without a licence and also without any proper management of the waste. These black spirals of plastic waste were allowed to wash away into the sea.

Said waste now turns up on beaches around the loch and this one I walked was no exception. You can find out more about this particular pollution from Friends of Loch Creran. They have some very moving videos about the waste in the loch.

As I progressed along the bay I felt distraught. So much so in fact, I nearly turned back. “What a mistake I’ve made,” I thought. “This is not going to be nice at all,”

But, I couldn’t just turn my back. I would be just like everyone else who looks the other way when confronted with some of the terrible things going on, on our planet. Bearing witness is important, to face the reality is vital. In fact, it is the only way that change will come about.

Tears came as I carried on along the shore. “What can I do? I can’t collect it all, there’s too much.” I decided to document it, to make the film below to show you what it is like, what is happening on this beautiful shore line.

Loch Creran is designated both as a Marine Protected Area and as a Special Area of Conservation. You can read why here. What a tragic joke that a protected area should be so badly polluted. What does it say about our world when this happens and no-one seems to care, particularly those with authority to grant licences and issue fines. (I do know some of you care and are out there doing your best, thank you.) 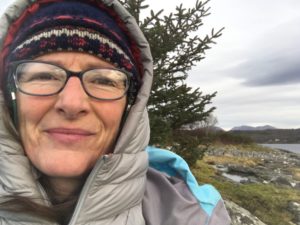 Finally I reached the point and made a choice. I could focus on my despair or I could let it go for now and instead eat lunch and watch the seagulls flying around in the strong winds. This is what I did and nature the great healer, through the seagulls, did her job. I sank into my surroundings and was soothed.

Even better I then noticed an otter. Closer inspection with my binoculars showed it wriggling around in the seaweed. It then took to the sea where it appeared to be fishing along the visible tide line. Success prevailed about 15 minutes later and it came ashore to polish off it’s catch.

Finished, it then moved closer to where I sat and began to clean and preen. This involved lots of wiping it’s face back and forth in the seaweed, presumably the equivalent of a napkin at the end of a meal. It then proceeded to wriggle and squirm around on it’s back in the seaweed with pale belly on full display. It licked it’s body, scratched and wriggled some more before then giving me a long hard stare.

I must have past muster for it settled down like a cat, curled itself up, tucked it’s tail under it’s chin and went to sleep.

Thank you Mother Nature I so needed that balance to my earlier encounter with dismay. And so it is with life. There is much that is hard, a grind in fact, which makes it all the more necessary we find the counterbalance in joy.

“Joy does not simply happen to us. We have to choose joy and keep choosing it every day.”

"A miracle is simply something that is impossible from an [...]