Lessons From A Tree, Part 2 – Becoming Me

Nothing on this earth is standing still. It’s either growing or it’s dying. No matter if it’s a tree or a human being.

Becoming me will no doubt be a life long process and it is being greatly aided by knowing trees.

Although I have never forgotten that incredible experience with a tree all those years ago that I described in Lessons From A Tree – Part 1, it wasn’t till relatively recently that I started to consciously learn more from trees again.

For some reason shortly after I became ill with ME/CFS I felt drawn to trees. I used to sit and look out of my window at the trees growing in my neighbour’s garden and those in the little wood nearby. I found myself wondering what it would be like, to be like a tree. It made perfect sense to me, but experience has shown me I need to explain.

Being on the West Coast of Scotland and by the sea I have watched trees living through some pretty wild weather conditions.  It occurred to me that through it all they just carried on being a tree. They didn’t moan or complain or try to be something else or be somewhere else, they simply stood in their treeless and continued being the tree they were. 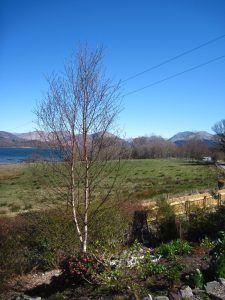 The little birch that had self-seeded in my garden is not looking around and wishing it could be like the full grown birch it came from, or like the beech trees next door. It  just gets on with being what it is, a birch.

All around trees are being the trees . Oak, hazel, elm, sycamore, birch or beech they all came from a seed. That seed had all they would become already in it. They are fulfilling all that promise and becoming the mighty tree they have the potential to be.

The human I am

I wondered what it would be like to just be a human, the human I am, Mairi?

What would it be like to be me, to stop trying to be like anyone else and to just be myself?

I also realised that to truly be myself I needed to be free from many of the learned behaviours, patterns and beliefs which plagued me and kept me stuck;

Who am I underneath all this?

And so, the focus of my self-development shifted. I no-longer spend all my time trying to get away from my “terrible” childhood, trying to heal the past and escape it’s impact.

Instead I became orientated towards becoming me. I am underneath all that conditioning from the past, there is a me who is free from all that stuff. It’s a subtle shift but an enormous one.

I am becoming me rather than undoing me.

Prior to ME/CFS I was driven by trying to get out from under the impact of my childhood. I wanted to get away form it all so I did shit loads of therapy, attended hundreds of self-help meetings, went on courses and workshops galore. Reading self-help books became a continuous occupation pursued in the hope of finding “the answer”.

Driven and obsessed with recovering I was running scared.  I could fall into such dark frightening places that I was willing to work very hard not to go there any more.

I felt like “back there” had it’s claws in me and I was never going to get free.

Now thanks to that little birch tree I am shedding something. Like it’s bark peeling away, I am slowly releasing my layers of limiting beliefs, patterns and behaviours which dictated how I lived my life. I am slowly learning about who I am free from the emotional stresses and traumas of my past. 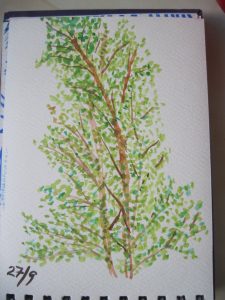 Of course this is an on-going process, but it answers the question I am often asked;

“Why do you keep on doing all this therapy?”

I do it to be more free, to be more truly myself, to learn how to be the human being that I AM. I do it because with every new discovery I am becoming me.

So, if you are caught up in trying to get away from your past. If you are working hard to recover, know that a shift in perspective could offer the change you seek.

Who you truly are is underneath all the crap and can be revealed. Slowly, perhaps with support, you can peel away the layers you had to create to survive and so reveal and become even more of the wonderful human being you already are.

Instead of the focusing on what you have to recover from how about shifting the emphasise to what you can become as you free yourself from the confines of the past.

“When you live a life you love, your joy and passion act like beacons to the world; you shine your light and show others that it is possible for them too. By changing yourself you change the world.”

Categories: Lessons From A Tree, Self Care