Walk 10 – Heading round the top of the loch from the Creagan Bridge.

Home/Walking Loch Creran/Walk 10 – Heading round the top of the loch from the Creagan Bridge.

The road hugs the loch along this section and when I had been looking at the map my heart sunk a little because I thought it might be a bit boring, tedious and also hard if I had to clamber over lots of road support rocks.

How very wrong I was, proving yet again that projecting and imagining we know what’s coming is pointless. Apparently 85% of what we worry about never actually happens. Mother Nature gives me another lesson in letting go.

“My life has been filled with terrible misfortune; most of which never happened.”
Michel de Montaigne

Setting out from the bridge I noticed the tide was coming in. It can run at as much as 5 knots at spring tides here. Fortunately the tide was still low enough to allow me to access the shore, 2 hours later, when I passed first section of my walk was covered.

For this walk I set out late afternoon on Tuesday 23rd Feb, a crystal clear sunny day with blue skies, little puffy clouds and hardly a breath of wind. I was experiencing Argyll at her late winter, early spring best. The mountains are snow capped at the moment which lends a fabulous contrast to the incredible colours of the hill sides. Usually I think of spring and autumn as the most colourful months but now I’m not sure.

I hope some of the photos I took will illustrate just what I am talking about.

Firstly across this narrow stretch of loch I looked towards the hillside of Ben Churalain. Terry Donovan’s excellent and informative Loch Creran, a scrap book journey, mentions wells which lie on this hill and that

“… Close to these wells is a rock with a carved outline of a medieval galley in full sail, dated 1729. There are various local opinions regarding the significance of the carved ship, from representing the location of a sunken vessel to marking a viewpoint over Loch Creran and beyond.” 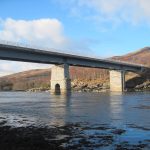 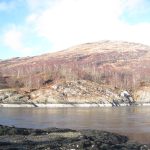 Looking across the loch to 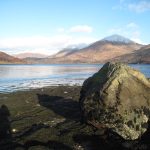 One day I would like to climb up and see those but on this walk I am staying at sea level where there is also much to admire, like the very marked water line on the shoreline rocks.

As with many of these walks the shore is scattered with rocks left behind by the glacier which melted 12,000 years ago. The rock below was a particularly large one, and interestingly not worn smooth at all. I think this means it was contained within the ice rather than rolled around and worn by it, but please correct me if I’m wrong.

Just when my moaning mind was about to start on again about it being a bit boring I spotted a set of steps, beautiful stone steps, who made these and why? The view is stunning but you could see it from the road so why the steps, pray someone please tell. 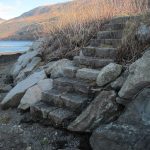 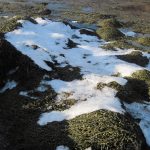 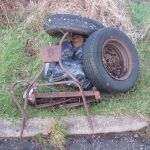 Looking around from the here I spotted something on the shore, snow? But no it couldn’t be snow lying on seaweed below the high water mark. Closer investigation revealed ice left behind when the tide goes out.

The next curiosity was a rope hanging from a tree. I went up onto the road to investigate why it might be there and found a lay-by with dumped rubbish. I know I have said it over and over again, but i just can’t help but say it again, argh…….what is wrong with people, there is no away. Another idiot, no, I mean ill-informed person, who thinks out of sight means gone, sad people, very sad.

The rope looked curiously like a noose but that may be because I’ve been watching the Overlander episode with lots of hangings in it! 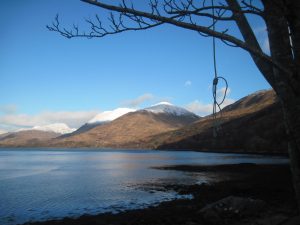 Stopping to isten to the bubbling and gurgling of a burn making it’s way down through the gravel and spotted another set of steps. Come on someone please tell my who and why?

After this I had to carefully pick my way over slippy seaweed covered rocks for a bit which took some concentration till the shoreline started to veer away from the road and became much more continuous rocky outcrops.

Due to reduced precipitation over the last few days I could actually walk along dry patches, rather than gingerly slip and slide. Mind you I did get a little over confident and fell a couple of times on slimey areas where water trickles across the rocks. 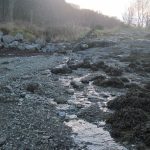 Second set of steps and wee burn bubbling through the gravel. 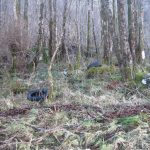 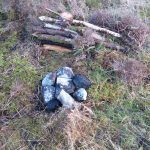 After tutting my way past tyres abandoned in the trees I came across a small fire pit with a little pile of logs ready for the next occasion. Whoever comes here has not only kept it tidy and clear of rubbish they have picked a magnificent spot with beautiful views up and down the loch.

Nearby a bubbling burn caught my attention, a moment to stop listen and enjoy.

I then marvel at the array of colours and textures that nature displays especially all the mosses and lichens which seem to adorn everything. It is a truly delightful palette with the lichens subtle hues of green and grey on one boulder neighbouring another full of bright yellows and orange and then the lush rich velvet mosses which I just want to stroke because they look so soft and inviting. If I was a fairy I would line my bed with these. 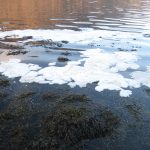 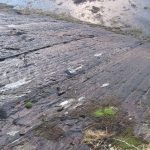 I did not attempt to walk across this. 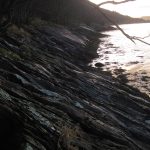 The sea here had a skirt of foam running along the edge and I wonder if the frozen ice I saw earlier was in fact yesterdays foam.

Here the rocks fell so steeply towards the sea I was forced to walk on the grassy edge at times. When it got easier I climbed back down and then heard a slash in-front of me. I peered over a rock only to see a little trail of bubbles moving away from me. It was an otter. It popped up only once, had a wee look at me and then disappeared.
I took this as a queue to have my tea-break, got out my binocs and scanned the shoreline but I never saw the otter again. I did see a few gulls floating about in the middle of the loch and a couple of oyster catchers flew by, none so stunning as last week though. 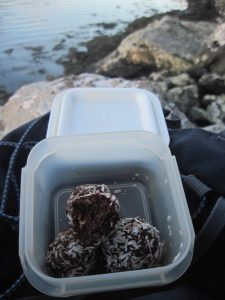 I sat and amused myself thinking about how different my eating habits have become since being unwell/recovering. Tea and a biscuit would have been the order of the day before but now I travel with a tub of nuts, water, a flask of rooboish tea with homemade almond milk and often some other snack/treat I’ve concocted. This walk’s treat was walnut, date, coconut and cocoa balls, recipe here. I love them but I know from experience that these do NOT delight those still eating a standard sugar laden British diet.

Nibble on scurvy grass anyone?

What a flipping magnificent place to have tea. The sun was setting; the last rays still gracing the snowy mountain tops up the glen in one direction, while the clouds in the other direction turned a golden yellow.

To be in such a moment is a true privilege, a sacred space suspended from normal life where I could sink into being and remember this is it, right now, right here is the only moment we ever have. What a very fortunate person I am to have so many of these moments full of bounty and abundance, right on my doorstep.

Some people travel the world looking for this very thing when here it is, right where we are. If you haven’t read The Alchemist by Paulo Coelho, do, it’s all about the search for what was always there all along. 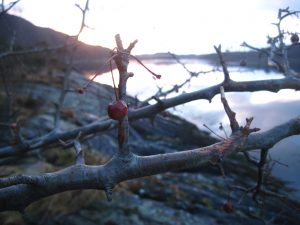 Cherry tree right beside the loch.

There was no obvious place to end this walk but one presented itself in the form of a tree. The LORN Natural History Facebook page responses to my photos identify it as a cherry, probably a wild one. I was amazed to see so many cherries still dangling on it, the one in our garden is usually stripped before we can get even one.

My parting finale from this beautiful loch was the incredible view below. 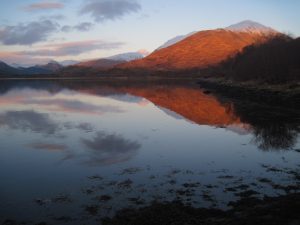 I made my way back up to the road taking careful note of where I was so I can begin from the cherry tree next time. My husband called and said he was on his way to collect me so I set -off back along the road. I came upon the lay-by near where the little fire pit was and there found a strange thing, a tin of paint.

Lying about 3 metres off the road was a full unused tin of lime green paint. I lifted it up and it seemed to be leaking from a hole with a twig sticking out of it, I think you can see it in the photo. What on earth has gone on and why would someone throw away a full tin of paint here? 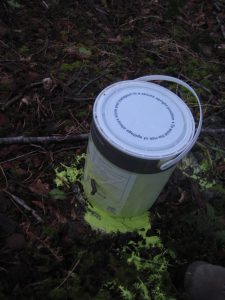 Tin of paint by the roadside

As I jumped in the car my husband asked if this was as far as I had walked. I explained that I had walked a little way back along the road. He then informed me that we were 0.8 miles from the bridge and it had taken me a whole two hours!