Walk 11 – Round the head of Loch Creran.

Thank goodness I’d taken good note of where I finished last time otherwise I could have spent ages just trying to figure out where that cherry tree was!

I made my way down to the loch past yet more tyres tossed in the undergrowth; out of sight and out of mind, for someone. I am actually very disappointed and saddened by the amount of rubbish I have come across on these walks. I like to think that my little part of the planet is largely unspoilt, that it’s escaped some of the worst of what man has done, the pollution we produce, but sadly it’s not true.

Of course we are not choking to death on air born poisons nor are we unable to drink the water it’s so contaminated, but nonetheless what on the surface looks unspoilt actually hides a story of disregard, disrespect and I would say down right laziness. We are fortunate enough to have a local dump site where different types of waste are collected, sorted and recycled or reused where possible. So there is no excuse for people throwing stuff away elsewhere.

Ok rant over, how about my walk? 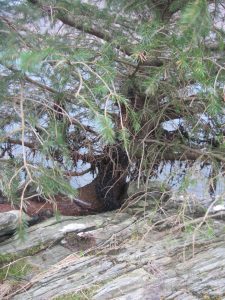 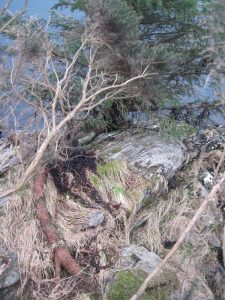 Look at this amazing little Christmas tree. She was sitting right on the shore and to my amazement had sent out an incredible root back up to where there is more soil. It seems astonishing to think that this could have happened, that a seed ending up stuck in the rocks could have germinated, grown and actually thrived. It does show how powerful the life force can be.

There was quite a wind blowing and as I came round to the next little bay my jaw dropped and out of my mouth came the words, “Oh my God!”

Swirling across the loch towards this little bay was what I can only imagine would have been the beginnings of a water spout had there been more wind and water space. It was about a metre in circumference, travelling fast, and pulling up spray to about a metre or so high above the loch. As it came towards where I was standing I gasped and experienced a little jolt of adrenaline as I wondered what would happen next. It danced and twirled across the bay hit the rocks and died. 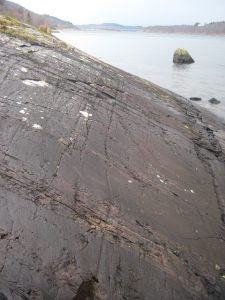 A glacier has been this way.

I so wanted to see it again, or to see another one, I waited, willing it to happen. But as we know it was one of those events we may only experience once in a life time, what a gift.

Honest to goodness I sometimes wonder why we ever stray far from home there are so many incredible things to see right, where we are. I don’t really mean that, but I do know some of us, me included, can have a tendency to think that there is something better out there somewhere and hence miss what we already have right here.

After passing rocks with striations from the ice-age I came across a Christmas tree, a proper one complete with tinsel and bobbles!

Someone has set up camp here, and very organised it is too. There’s a bin for rubbish, a washing line, fire pit with grill, cooking implements, seats and a burn running nearby. It’s a lovely little spot, well chosen. I felt a bit like an intruder though. 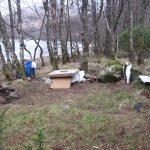 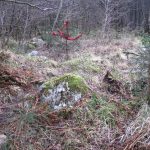 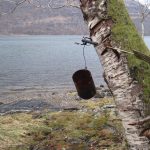 I had a little respite from clambering over rocks for the next section and then it was back to the slipping and sliding I’m used to. As I past over a burn my attention was drawn up towards the road bridge and there was all this rubbish, loads of it. It looks like someone was refurbishing their bathroom and just chucked the old one away. So whoever you are you have a lovely new bathroom but look at the cost.

The next section was fairly easy going underfoot taking me right up to Druimavuic House. Just before that I noticed this odd structure set-off to the right by a track up to two houses. It’s not on the 2011 google street view, does anyone know what it is please? 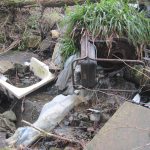 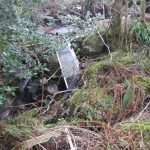 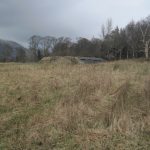 The head of the loch is flat and grassy and the road here can get flooded in which case you have to take the Druimavuic house track to bypass it. Years and years ago I did this once. I was 17 and a new and keen driver. I was dispatched to North Connel from East Lothian to help look after my Grandpa who had had a hip operation. He and Granny usually had a little rest after lunch and I was allowed to take their car and go exploring. This was in the days before the Creagan Bridge was open so you had to drive round this road if heading north. I did and it happened to be a day the road was flooded.

Although the head of the loch looks flat and grassy it is infact punctuated by a meandering burn as well as masses of holes and ditches created I suppose by the rivers and tides. I had to walk quite a long way back inland before I found a little wooden bridge where I could safely cross. 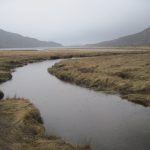 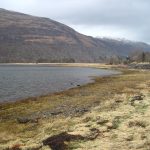 Looking towards the top of the loch. 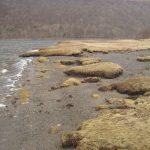 Top of the loch.

After that I made my way to the gravel and grass which marks the very top of the loch. From here, had the weather been good I could have looked back down towards the Creagan Bridge.

At this point it started to rain so I carried on, wind at my back hoping to find a little nook somewhere for a break. After wending my way around several large pools of water connected to the river mouth I eventually made my way up to the road bridge. The bridge spans the river Creran which runs into the head of the loch.

I crossed the bridge and found a relatively sheltered spot to hunker down on the far side. Here I enjoyed a welcome break, snack and hot drink. I actually love these moments when I stop, sit and take in where I am and reflect on where I have come from. 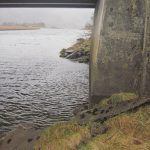 Looking down the river towards the loch. 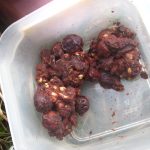 Snack of the day. 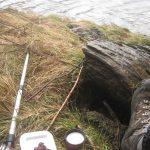 Time for a break.

I thought about how different every walk has been and how different they would all be if I did them again. Everything changes, the weather, the seasons and the tide, nothing stays the same for very long. I called my business Change Is Always Possible and it is nature that shows me this is true. Not one thing remains the same. Some may change very very slowly over millennia, but other things change almost instantly. There is birth, then growth then death, over and over again. During growth all manner of things can happen that make life a challenging, like the little Christmas tree whose root has become so big and strong to cope with the adversity it found itself faced with, or the burn negotiating a different path around the obstructions thrown in it’s course. It’s the same for us, we face difficulties, some seem insurmountable , but they never are, we just have to find our way through, around or over them.

Once back on the bridge I decided to carry on, to begin my walk down the other side of the river mouth and on to the opposite shoreline of the loch. It felt quite exciting to have come this far, and to wonder at what might come next; a turning point.

The road runs along side the shoreline here and I was surprised at the number of vehicles that went past. Several delivery vans, two empty forestry lorries, a animal feed lorry, two business vans and several cars, two with trailers. It’s not such a quiet spot as you might think.

Along here are the most amazing stretches of twisted rocks. I would highly recommend going to take a look. Climb down onto the shore where the Glasdrum Nature Reserve car park is and walk to your left up towards the river, you won’t have to go far before you see the seams of rock. According to Terry’s book these look like Dalradian Limestone. Did you know the Dalradian rocks around this loch started off at the South Pole?

You can see from the photos that there are completely different layers of rock lying one on top of the other, it was fascinating. 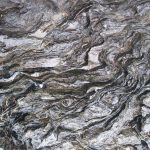 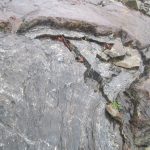 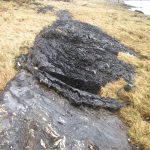 Here is a link to Terry’s very informative book.

Eventually I reached Inver Boathouse. One of my friends had their 50th birthday party here a few years ago. I believe it is available for rent but their website does not seem to work. 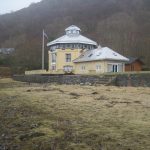 From here I could see that the shore becomes very rocky again and after over 3 hours on the go I decided to leave that for another day. The road leaves the shore here so I would be committed to walking to the Creagan Bridge, a bridge too far for now.

I set out along the road, tried hitch hiking but to no avail so ended up walking all the way to the bridge anyway before my husband collected me. Still I think the road is a darned sight easier than what I will tackle on the shore next time.