I am walking the shoreline of Loch Creran on the West Coast of Scotland. This is a personal challenge, you can read more about it here.

My husband dropped me at Inver Boathouse and I prepared for what I thought would be quite a challenging walk. It was, in more ways that I had expected.

Before I had gone more than about 20 meters across the gravel beach near the house I was engaged in picking seaweed. I attended a seaweed forging course a few weeks ago so had come prepared as never before.

Apart from all the normal walking gear, waterproof coat and trousers, hat, gloves, scarf and poles I also carry a rucksack which contains:

Now that foraging has been added to my adventures I also carry:

More plastic bags
Plastic tub
Rubber gloves for collecting nettles and seaweed if it cold as well as wet.
Scissors

Yes, I did have to get a bigger bag and yes I do now look like I might be off to hike for a week!

So what caught my attention on the gravel beach was Laver, at least that’s what I thought it was. Apparently it’s only one cell thick. It was attached to the gravel and small pebbles so I used my scissors to cut it off leaving it the chance to grow again, as advised. I also collected False Carrageen which I have done before and used to make a milk junket. 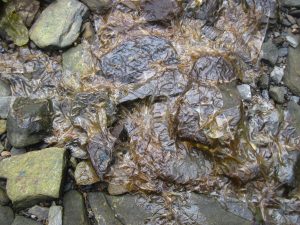 I can’t tell you the thrill it give me to collect food like this right from Mother Nature as she provides it. This is what we are designed to eat and in my opinion are much better off seeking out or at least the next best alternatives i.e. real food grown in the earth without tonnes of pesticides.

When we eat like this we are taking in the whole energetic vitality of the food source, we receive what our still primitive minds and bodies need. When we eat highly processed and manufactured foods, not even remotely resembling something you would find in nature we are killing ourselves. Think about it, we are part of nature, everything we needed was already here, we evolved out of it.

Our bodies are not prepared to eat processed foods and they suffer in the trying. We force them to deal with toxins, poisons and other unidentified chemicals the human body was never designed for. Just like all the rubbish I have seen around the loch which is left for nature to absorb and deal with, we do the same to ourselves.

Eat real foods, that’s my message and foraging can be a wonderful part of that which reconnects us to what we essentially are, a living breathing creature of planet earth.

Ok so seaweed loaded I faced the rocks. Most of this shoreline consists of large areas of rock falling fairly steeply down into the sea. I had come shortly after low tide hoping to get the benefit of being able to walk lower down than the rocks. I did manage this at a few places but it was all a massive carpet of seaweed and very slippy, consequently I took a few nasty falls, bruises only fortunately. 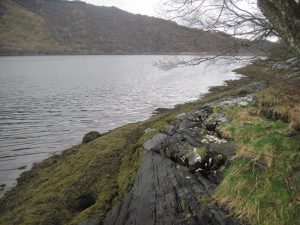 Now isn’t it amazing how life can provide us with what we need when and where we least expect it? I have been gardening recently and discovered I’d lost one of the things that holds my length of string for measuring out straight lines. How that happened I have no idea. Imagine my surprise when I came across not one but several of the very same plastic rods. They were attached to twine wound tightly round a branch but I was able to prise them loose. 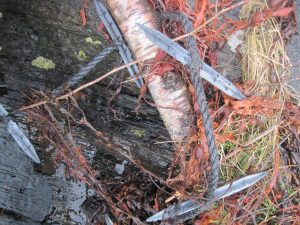 My heart sunk a little at how tricky it was to make my way along this shoreline. Seaweed covered rocks or smooth slippy rocks forced me to walk along the grass line a fair bit. It had it’s compensations though as I found a spot with lots of primroses and foraged a few for a salad later. 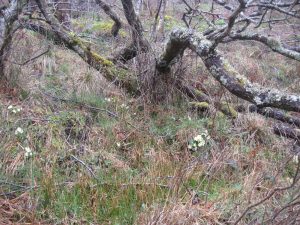 Shortly after that there was a section of shore I could walk along. It was gravel and mud and covered in shells. Then back to the grass line. I tried walking on the rock but it really was too slippy and dangerous. No point risking a broken ankle. 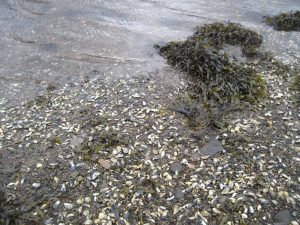 My first tea break was sitting out on the the little island shortly after the narrows under the bridge open out into the upper basin of the loch. With the tide out it was easy to access.

As I sat and listened I could clearly hear the compressor being run on the other side of the loch. I heard it for my whole walk. Aberdeen diving club was taking new members out for their first open water dives. I know this because my neighbours daughter is one of their instructors. I also found out that the steps down to the shore over on that side of the loch were made by the divers. 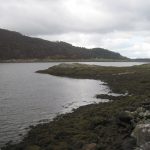 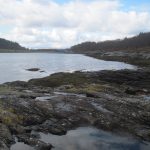 View towards the bridge 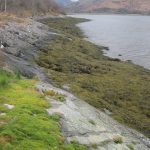 View back up the loch.

More muddy shore with shells gave way to lots of seaweed covered rocks where I picked a bag of mussels for dinner that night. After crashing down again trying to get from the seaweed area up the rocks I gave up and made my way along the grass line till I reached a small bay with a spit running out into the loch. Underfoot was initially muddy but eventually became only shells. It turned out the whole spit is actually a mussel bed that extends into the loch. 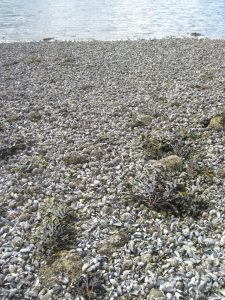 At the head of this little bay was a boat house for the lodge on the hill above. 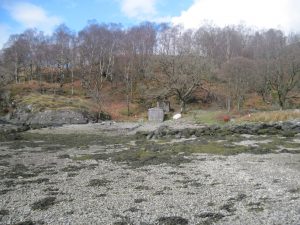 It became impossible to stay on the shore or rocks without risking a nasty fall to the sea below. So up to the grass and trees I went. My next break was spent lying in the sun under a tree watching the clouds go by. I used to love doing that as a child and don’t do enough of it any more. Do you?

If not here is a short clip for you to enjoy.

As the loch narrows in towards the bridge the rocks get steeper and go much higher necessitating my climbing up fairly high certainly the furthest from the loch I have been so far. The sun was out and the views spectacular. At the highest point I could see across the bridge and on towards the mountains of Mull in the far distance. 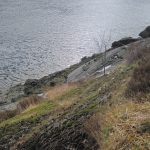 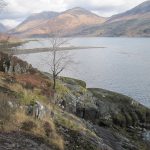 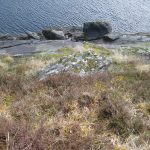 There were some wonderful mosses around at this point, rich carpets of green only normally seen by the cows. These highland cows were not around but they had left patches of churned up mud everywhere. I think they must be pretty sure footed to have gone along some of the places where I followed their tracks. 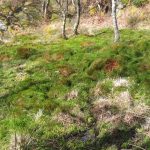 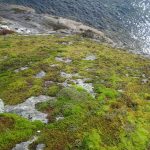 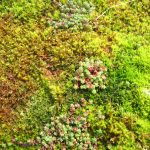 After much clambering I eventually made to the bridge, hot, very sweaty and glad. I saw this odd thing wrapped around a tree. It looks electrical but why then does the cable head down into the water, very curious? 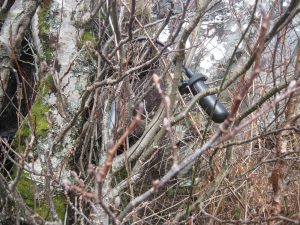 I sat on the other side of the bridge for a little gathering myself and then made my way back up to the road, passing teenagers on their way down, up to no good I’m afraid.

Yip I had left them at my second tea break spot. I don’t have a spare pair and after much moaning down the phone to my husband I conceded that there was nothing for it I had to go back.

As I made my way down the side of the bridge the teens, despite being tucked up inside the bridge, could not disguise what they were up to. Lets just say it wafted in the air and smelled very strong!

I feel like setting off on a whole rant now about our young people and what is going on with them but  that’s for another time and place.

So off I went thankfully not even attempting to stick to the shore which made it a little easier, though still exhausting. I did get to see a huge holly tree which was great and lots more moss.

Since my tea break spot was fairly near the boat shed bay I made my way there and then took the lodge track back up to the road. It was pretty steep and I was trudging by then, not really wanting to walk another step, it will be a while before I am ready to tackle a mountain!

On my way back down the road towards the bridge and my pick-up point I saw the cows. They are magnificent as was the view down the loch. 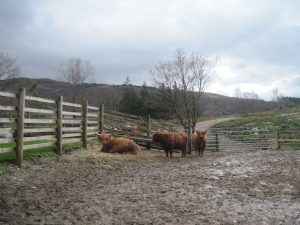 There are more photos on my Facebook page, Walking Loch Creran.