We live like Roman Emperors addicted to our luxurious lives of consumption, regardless of the cost.

Addiction is an illness of denial.

My dad used to say he didn’t have a problem because he only drank at night. Then he said he only drank during the day because he had to go out for lunch. In the end he drank in the morning too and looked like any other park bench drunk in the final throws of their addiction; a terrible, heart breaking mess. Nothing else mattered except his fix.

Addictions are something we use habitually, we become dependant on them. The idea of managing without seems inconceivable. Believing we would experience adversity if they were removed we make excuses, claim to enjoy them and denigrate those who question them. We cannot face the truth and feel ashamed about our inability to stop.

A self destructive cycle

Through the help of a 12 step support group I developed compassion for my Dad and his addiction. I saw that he was stuck in a self destructive cycle. Although he claimed to enjoy a drink he couldn’t stop. It wasn’t pleasurable for him or anyone else. After a certain number of drinks a switch flicked and he tipped into nasty, violent and vicious behaviours.

If left untreated addiction intensifies over time. The behaviour gets worse and the toll on family and friends becomes colossal. My Dad never escaped, falling down stairs drunk for the last time 10 years ago. He smashed his head on the floor so badly he suffered a massive haemorrhage. An addicts end is rarely pretty.

So how does all this relate to you and me? 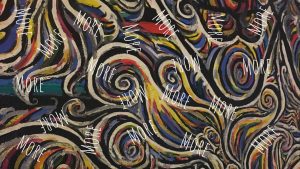 We live inside a system called industrial growth, predicated on the idea that we must seek more. Fuelled by continued and increasing consumption it requires ruthless marketing and targeted advertising to keep the wheels turning.

Initially, like my Dad’s drinking it probably all looked fairly normal, no real harm being done. However over time the consumption has increased, the desire for more grown and the devastating impact intensified. Now, like my Dad tottering on the stairs, we stand on the precipice of disaster.

I have this image stuck in my head. A Roman Emperor’s bloated body reclining on a sofa, being fed grapes by a slave. Decadence and debucaery surrounds him as he waves away the current entertainment, bored. He lies there in his bed of addictive consumption with little or no regard for anyone or anything else.

This is how I see most of us (me included).

Compared to many on this planet, we live luxurious life-styles. We literally lie around on sofas eating food produced by modern slavery. We flick through a constant stream of entertainment, caught in a never ending loop, paying scant if any thought to the impacts of our excesses.

Consumption is the name of the game as our lifestyles devour and devastate the planet.  Food, drink, TV programmes, clothes, holidays you name it, all relentlessly pursued despite the cost in terms of ourselves, our fellow man/woman, creatures and ecosystems of the planet.

Are we not the modern equivalent of roman emperors?

Is this not the madness of addiction?

It was a solution

My Dad’s addiction wasn’t the problem. It was his solution. He admitted that he “couldn’t handle life,” so he used alcohol to anaesthetise this emotional pain. Gradually over time its use eroded his spirit. He wasn’t happy, he wasn’t healthy, his life was reduced to a treadmill of drinking.

So what is the emotional pain we are numbing?

We each carry our own individual suffering. Living a human life confronts us with painful experiences. However, added to this we lug around collective wounds hewn through the centuries, forgotten losses and all the unacknowledged injuries to our collective soul.

Religion’s spiritual message distorted by human greed and power, the dominance of patriarchal systems, war, the Industrial Revolution and more created a collective human ache which could be exploited.

Gradually over time we became separated from our indigenous nature. We no longer live as creatures of planet earth, in harmony with her rhythms and cycles. We left the land we belonged to, we separated from family, friends and communities. Time deep connections which had sustained and nourished us for thousands of years, were lost or severed.

Our inner connection to self, our hearts desires and yearning was squashed by centuries of servitude  and bondage to the demands of others, an elite. We now live deeply embedded in the industrial growth model which supports this separation from self, our disconnection from nature and from each other. We rarely have time to reflect, contemplate or question what is going on.

Heading for a fall

We, like my Dad, are trapped and seeking pain relief. Consumerism offers an artificial fix with it’s endless stream of shots to mask what lies below. Unfortunately, like my Dad sitting in his urine soaked chair, whisky glass in shaking hand, we too are heading for a fall. We are not happy, we are not healthy and for many life is reduced to a treadmill of working and consuming.

We still have a choice

One of my Dad’s favourite books was called The Decline and Fall of the Roman Empire. Was it some tragic parody for his own life, successful in so many ways yet destined for a tragic end?

Many great civilisations have collapsed. They were, like my Dad, unable or unwilling to change or adapt. This need not be our story. We still have a choice, we can write a new chapter for human life on earth

Rather than fall we could rise.

We could restore, regenerate and recreate how we collectively live on earth. Time is running out for sure, but that does not mean it’s impossible. If we act now, if we heal, not only our individual wounds but also the collective pain we carry, we have a chance.

So, instead of automatically reaching for the next must have item or experience, rather than switching off and swiping, before you order, book or buy, pause for a moment.

Dare to face what lies below this desire to consume. We can help to change the system by changing ourselves.

Use EFT (Emotional Freedom Technique )to explore what drives your consumption. Be it fear of missing out, not feeling good enough, wanting a treat, suppressing anger or some other emotion, EFT can help. It helps to shift and clear the energetic connections allowing you the freedom to make a clear and considered choice.

Where deeper more persistent issues drive your need to consume employ the services of an EFT or Matrix Reimprinting practitioner who can help you clear these deeper issues.

“It is good to realize that falling apart is not such a bad thing. Indeed, it is as essential to evolutionary and psychological transformation as the cracking of outgrown shells.”