It has taken me rather a long time to write up this walk. A holiday, a family crisis and a sewing challenge have taken my energy and attention elsewhere. This morning I have decided enough is enough and I have now  finished what I started a couple of weeks ago.

As I prepared to leave for my walk a rainbow appeared over the Loch a taste of what the day would hold; sunshine and showers. 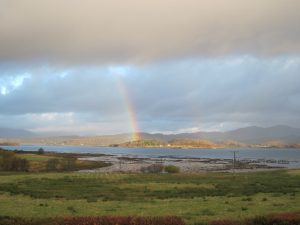 I ended my walk last week wondering if I could manage round the shore of Sgeir Callich, the island that lies near the entrance to Loch Creran. Well, the tide looked right so I decided to do it.

The low tide was at 10.20am on Tuesday morning which meant that, if I set off pretty soon after finishing my morning course I could at least start while the tide was still falling.

Sgeir Callich is only accessible at low tide, and I had no idea for how long. This added an edge of anxiety around my whole walk since I did not want to end up cut-off and having to wade or call for help.

However haste was not what this walk demanded so I keep telling myself that it would be fine and  if I did get cut-off it was hardly the end of the world. This is especially true as the people who live at the old ferry house have a wee boat pulled up on the shore by the slip-way.

Although there is only one name the island actually has three distinct parts. The sides are rocky and for the main part fall fairly steeply towards the sea. This coupled with a lot of heavy rain made walking the shore line a rather precarious and hazardous event. 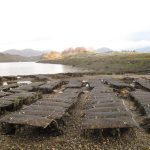 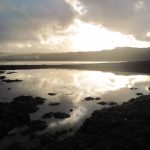 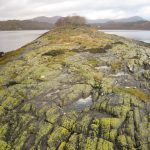 Looking out along first section of the island.

Now on reflection I can see that this was probably the least relaxed walk so far, apart from my tea-break of course. I was worried about the tide and about slipping into the sea, or in fact just slipping and hurting myself. Wild thoughts of falling and twisting my ankle, then missing the tide and a rescue boat having to be called did wander through my mind.

Suffice to say none of my imaginations came to pass and I successfully scrambled my way round, finding as seems usual now, a few delights along the way.

Starting from the old ferry slip I picked my way through the oyster farm beds to the seaweed clad rocks where I was thankful for my walking pole as it steadied my steps. To the right the bomb crater was easily visible beautifully reflecting a gap in the clouds.

The islands appear to be more layers of rock turned on their sides. Not quite as stunning as those on my first walk but beautiful in their own way because of all the shades of green from the grass, lichen and seaweeds. In particular I loved the distinct layers of differently coloured seaweeds around the edge of the island. 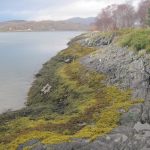 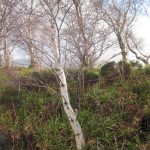 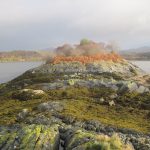 Looking towards the third section.

Each section of the island is quite distinct. The first has a grass and rock top, the second a little copse of mostly silver birch and the third a mix of trees with lots of bracken around and beneath.

Between the second and third sections of the island there is quite a large area of seaweed in which I discovered several huge anchors and piles of chain. I have no idea why they are there; something to do with the moorings, or the old mussel farm that used to be there?

Close by I found a beautiful rock pool which reminded me of Christmas with it’s pine needle green weed and bobble red sea anemones. 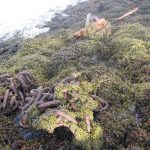 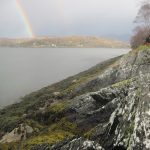 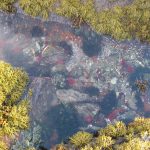 Looking up another rainbow greeted my clamber around the third island. The going was getting steep now and I found it hard. A nest of floats nestled in the rocks, a clutch of red plastic eggs distracted me and provided a little rest stop.

Relieved to reach the end of the island I nestled in under a tree to get a little protection from the wind and rain which had started. I enjoyed watching a few birds skipping about in the seaweed while supping my tea. I also watched a cormorant who stood stock still the whole time I was there, and a seagull trying to fly against the wind being buffeted up and down and then finally turning around to zoom off in the other direction.

The rocks at the end of the island are mostly covered hence the green marked buoy just off the end. I can see this buoy flashing in the evenings from the safety of my home, it reminds me of how very grateful I have been for all the navigation markers that have guided me round hazards at sea or home after a long journey, they are always very welcome. 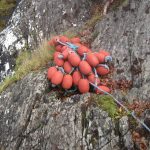 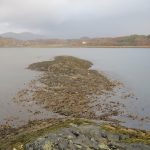 The end of the island. 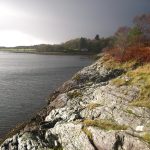 Looking back down the north side.

Making my way down the other side of the island was initially much steeper and harder but the sun came out making me stop for a moment to take in the wonderful view up the loch and along the island edge, beautiful. I particularly loved the contrast of the autumn bracken against the limey green grass.

As I reached the middle section I got a bit of a shock as I encountered the remains of a bird. Something had been feasting and basically picked it almost clean. What could have done this, does anyone know?

I continued on and easily made it back before the tide came in, so my earlier angst was such a waste of time and energy. How often do we do that in life? Well some of us, we worry away about something we needn’t, missing out on being wholly present to where we are. 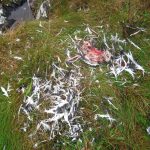 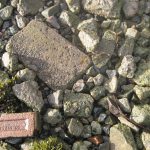 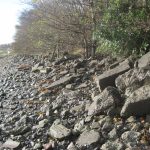 I decided to carry on along the shore of the loch and ended up walking around the corner to end at the Scottish Sea Farms processing plant. Looking back I was rewarded with the beautiful scene below showing the three parts of the island and their quite different characters. 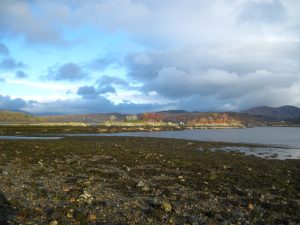 The shore here is mostly clay, gravel and pebbles, but also curiously littered with old bits of pipe, concrete and bricks. The larger sections of concrete look like they may be a sea defence or perhaps they were dumped. Certainly this section of the shoreline felt tainted for me. It’s the first time I’ve encountered somewhere, where the presence of humans has markedly altered nature, and I didn’t like it.  As I walked towards the buildings of the processing plant I felt sad, I didn’t want to engage with something man-made. I wonder how often I will find this sort of contrast around the loch’s shore? 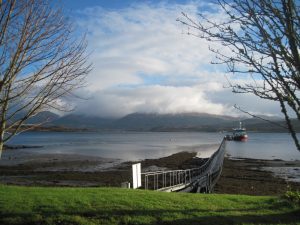 Looking up the loch from the Scottish Sea Farms pier.