Starting in November 2015 I am walking the shoreline of Loch Creran on the West Coast of Scotland. This is a personal challenge you can read more about here. 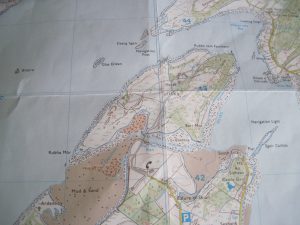 The mouth of Loch Creran is narrow and bordered on the south by the Isle of Eriska. Originally I was just going to walk the half of this island which lies at the entrance and inside the loch but it seemed a shame not to walk the whole island.

Therefore this walk started at the bridge on to the island and followed the shore around to the south and west. My Facebook page Walking Loch Creran has a photo album, for those interested in seeing more of what I saw. This blog post is more of a reflection; my thoughts and experiences while walking.

Starting out I was immediately confronted by a slight discomfort because I did not know this place. I have only ever driven or walked over the bridge, I had not even considered if it was possible to get down onto the shore. After a scrabble along the bridge wall and a leap down I made it. I discovered that there is an arch under the road so you can walk through and follow a rough track around the shore. At some point this has been marked by white posts, a few of which still remain.

I felt a slight disappointment, I thought I was going to be off the beaten track. Silly really since the hotel guests would of course want to roam the island far and wide including the shore.

Tunnel under the bridge 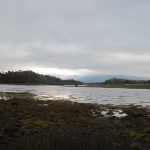 Looking back towards the bridge 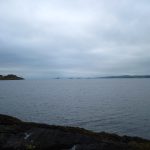 Once I got over myself off I went round an area which dries out at low tide. There were lots of reeds and that is where I started to notice the birds. I couldn’t identify them all, some flew off too fast and some were too far away. In addition to that I don’t know much about birds so probably couldn’t have identified them all, even if I could see them.

I wondered why? Why don’t I know anything about birds? I could feel the stirrings of inadequacy and embarrassment. How can I admit I don’t know?

Tosh of course. I may not know much about birds but that’s because I’ve spent my time, till now, learning about lots of other things.

But never fear I did ID some as I walked around. Most of these were in the bay at the beginning of my walk:

As I rounded the bottom end of the island I looked down towards the little islands off Lismore and sensed a wave of nostalgia wash over me. I have been past those islands so many times when off on sailing adventures. I also recall visiting the one my extended family affectionately call Easter island. It’s real name is Eilean na Cloiche but as children the stack of rock in the middle looked like an Easter Island head to us.

After this wave ebbed, my attention turned to the rocks below my feet. I’m not sure what they are apart from the fact that they are incredible. I was in awe, not only are the breathtakingly beautiful clad in their autumnal decoration of mosses and lichens they are obviously very, very, very, very old and have been through some incredible process. 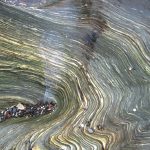 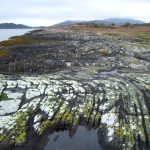 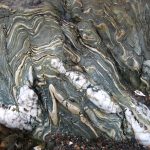 Of course all rocks are old but somehow these ones let you know they are ancient. It may be because there are such obvious layers, which leads me to think they are sedimentary. All those layers of rock were not only once silt they were also once horizontal and now they stand vertical, warped into sweeping curves caused by some extraordinary force of nature. I think this is part of the Appin Limestone formation but it’s very hard to tell from the geological map even with a magnifying glass. Perhaps someone will be able to tell me.

Something caused me to look up and there only a few metres away was a seal having a good look at me. I spontaneously started whistling, and it bobbed about following me along the shore for a few minutes. These connections with wild life are always so special, when we meet, when I am watching you and you are watching me and we are watching together for a moment in time.

As I continued I felt myself being pulled into the calm gentle ebb and flow of the sea wafting in and out of awareness and being-ness. I studied the rocks, looked up at the view, identified landmarks and then became lost again in lines beneath my feet.

My tea and a snack break coincided with watching a yacht motor down towards the loch entrance followed by one of the quarry (Glen Sanda) boats heading in taking staff off shift. What an unusual commute to work that is. Later in this walk I will pass the pier the quarry boats leave from, where they head out into Loch Linnie around the top of the Island of Lismore and over to the mountains of Morven. I’ve never been but apparently they are making an enormous hole in the middle of a mountain digging out granite that is shipped all over the world. 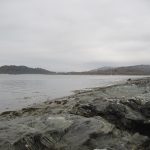 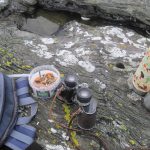 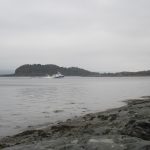 Finally I reached Otter Point where the hotel have placed a bronze statue of an Otter. It sits opposite the rocks with the pole, as they were known in our family. To us this meant we had arrived home, back at Loch Creran, the beginning of the entrance. It is here that the sea narrows and the tides race and you had better know what you are doing if want to venture into the loch in a boat.

The last section of my walk left the rocks behind as they angled off into the sea. Pebbles gave way to gravel as I turned the corner towards the hotel pier. I wandered out to the end of the pier marvelling at the seaweed streaming out in the tide and identified, with the aide of my grandfather’s binoculars and my handy guide, a male and three female Red Breasted Merganser, a fitting end to my walk. 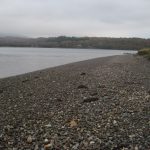 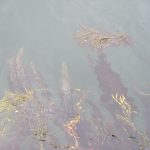 Seaweed on the pier. 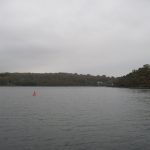 Entrance to the loch.

I began this walk feeling slightly inadequate for not knowing more about birds and I ended full of excitement as I identified one I never knew before. This reminded me that it is always ok not to know. We can only ever know what life has taken us to, and shown us, so far. There is no right or wrong, there is only WHAT IS. It is what I do with that, that matters.

“Success is to be measured not so much by the position that one has reached in life as by the obstacles which he has overcome.” Booker T. Washington