“How was your walk today Mairi?”

These conditions are not unheard of here on the West Coast of Scotland. In fact there are some poor visitors who come and only experience wet conditions and wonder what all the fuss is about. Indeed my Mother-in-law’s first visit, after we moved north, was an extremely wet and wild Oct week and for the life of her she could not understand why we had moved here. Fortunately she came again, the sun shone, the sky was blue, the sea crystal clear, the mountains green and then she understood.

We live with a weather lottery.

Anything can happen, sometimes it is breathtakingly wonderful and stunning and then other days…….well other days can be like today, dreich. The sort of day that makes you question if it’s ever lovely. Fine but annoyingly heavy and persistent rain soaks you through and only people on a mission or with a dog to walk venture out. It gets in every nook and cranny, seeps threw the seams and drips down, there is no escape.

Nipping from car to home or shop you might get a bit damp but walking in it for two hours makes you and everything with you very, very wet.

However there is an up side, no wind. Actually it’s more of a Godsend. Dripping drizzle is one thing driving rain another all together. So thankful for small mercies we set -off. On this walk I was accompanied by Seona Buchanan-Smith and her two lovely dogs. The Buchan-Smith family own and manage the Isle of Eriska hotel and Spa so it was great to hear some of the islands stories from Seona.

The main house was originally built as a holiday home, in the 1880’s, but it wasn’t the first building. The butler’s home, now called Arnott’s House, after him, was constructed first so he might manage and oversee the main build. This butler’s house is now one of the hotel’s self-catering accomodations, with wonderful views over Loch Creran to Ben Cruachan in the background, on a good day, as we would say around here.

We walked from the bridge around the island to the east ending up at the pier where I finished Walk 1 last week. Close to the bridge are the remains of a Crannog. Fortunately it was low tide and we could see the mound of rocks. These crannogs date from around 2,500 years ago and were made by piling rocks in a mound upon which a wooden dwelling structure would be built. There is a reconstructed crannog on Loch Tay which you can visit but for now, here, we must be content with the pile of stones.

I personally find these and other piles of stones called cairns tremendously exciting. I love the feeling of being connected with something very ancient and human, that someone way back chose to live here, same place I do.

If piles of stones don’t do it for you then perhaps the idea of cockling might. Opposite the next part of our walk lies a muddy bank where people cockle. In fact there are several places around the loch where this happens. I have spoken to some cocklers in the past and discovered that they do it to sell them, by the bag, to a middle man who then sells them on and so on, until they end up on someone’s plate, most often abroad. Remember that little cafe by the sea, the chilled white wine and plateau de fruits de mer……probably came from that there muddy bank! 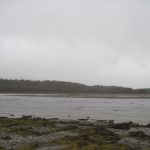 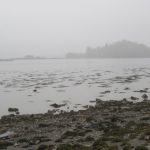 South Shian and the fairy hill.

As we continue we come to South Shian bay, empty now, but in the summer full of the yachts of the South Shian Moorings Association. This is where my father kept his boat and I have fond and amusing memories of arriving at the old ferry slip. We would drive up after school on a Friday evening invariably arriving after dark. In the summer we would be eaten alive by midges awaiting our turn to be taken out to the boat. In the spring and autumn we’d wait in the dark while dog, cold box, bags and boxes were shipped out with Mum. We’d see a distant light go on, know they’d made it and then hear the reassuring chug of the dingy outboard as Dad returned for the rest of us.
Around this part of the island there is clay, lots of it and guess what? The chefs at the hotel use it. They do. No not to make crockery, they bake things in it. They also try other tricks like tapping larch trees. So be warned a meal at the restaurant may be an island experience somewhat more than you imagined!

About now we talked about the island wildlife. Seona tells me she saw red squirrels recently which is heartening news. There are also deer, pine-martens, otters, and badgers seen on the island. 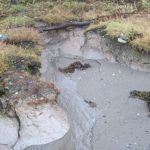 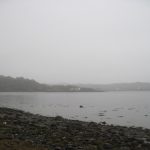 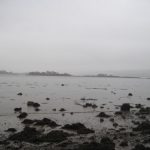 Looking east across the bay we see the island of Sgeir Caillich. I tell Seoan about the bomb dropped there during the war. Depending on the tide I hope to show you the bomb crater when I get to that part of my walk. To the north we see North Shian ferry house. The last ferry between South and North Shian ran in 1948.

At the north end of the island the grass, clay and stones gives way to rock, layered rocks again, possibly the same seam I saw last week. Here they fall steeply into the sea so the going was harder and very slippy. Thankfully I had a walking pole with me which will be my walking friend from now on. Ideas of only oldies needing sticks are banished now having leaned and levered my way around this part of the island. Occasionally I could walk on the barnacles which was a much better grip. Having walked barefoot on barnacles I did wonder though, what it felt like for dog paws.

The dogs accompanied me bounding up and down the rocks like mountain goats while Seona sensibly used the track at this point, meeting me on the little beach tucked in at the north and then again as we reached the pier. Along the way we pass the notice heralding the entrance to the loch and alerting boat owners to the mooring restrictions within the loch.

I don’t know why it feels so important to walk the shore-line but it does, and I have gradually learned to listen to that voice inside, that internal nudge, and not to dismiss it out of hand as I used to. I don’t know why, I may never know why, but I trust the feeling and follow it, and it feels right for me.

So my second walk ends with a heron flying high disturbed as the dogs bound along the shore towards the pier. I feel happy, it is good to have completed this island circuit, and to sense the anticipation about my next walk. 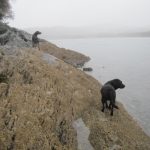 Dogs on the barnacles 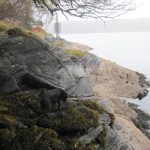 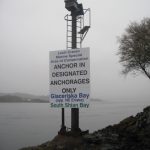 Entrance to the loch

I am aware that some of you may be interested in walking on the Island yourself. I am lucky enough to be a member of the spa, so am able to use the facilities as part of that. The island is not open to the public per se, but if you go for lunch to the new Deck Restaurant (amazing views), or book a treatment at the Spa you can then enjoy not only those facilities but a walk on the island too.