As the crow flies this walk is minuscule however it still took me a couple of hours because I visited the top of all the rocky outcrops on the way. These are all mini islands though the bare rock top of one was so small it is probably awash most high tides.

As I left the bridge the tide was still noticeably flooding out even although it was near the bottom of the tide. It looks like a fast flowing river when it’s like this.

With the tide out all the barnacle covered rocks were exposed with what I initially thought was sand, in between. Closer inspection revealed that it was all the tiny broken pieces of shell and barnacles, which I guess will eventually become sand. 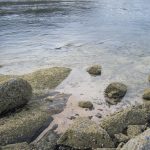 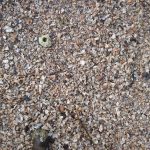 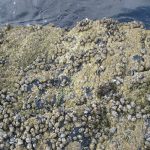 I hadn’t had breakfast before I left as I was trying to fit in with my husbands timetable which meant leaving earlier than I would have chosen. I took it with me and once tucked out of the cold wind I sat down and enjoyed the view and ate it. Incase you are wondering it was banana, avocado, almond milk, cocoa powder and chia seeds all whizzed up; it’s delicious, nutritious and an extremely simple and easy breakfast for on the go. 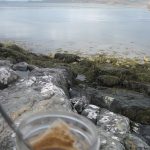 Breakfast with a view. 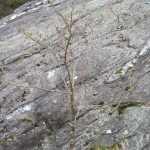 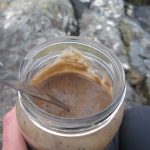 Along the next section what caught my eye was this little tree, another making its way in life despite fairly harsh and challenging conditions. My Lessons From A Tree blogs record a few of my encounters with trees, they really are such great teachers. If this little tree can make a life for itself here, what can we do given the freedoms we have?

Nearby I also spotted some stunning lichens, in fact, for some reason the colours and textures of these amazing formations wowed me more than normal on this walk. The ones below were all on the same rock. 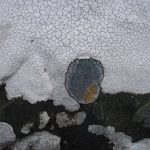 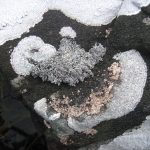 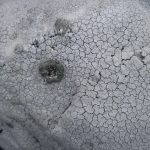 Ok a rant now. Rubbish, yes, that old chestnut which crops up nearly every week. I’d turned a corner and there it was strewn amongst the rotting seaweed. This bay faces the prevailing wind so I expected there to be rubbish here more than on the other shoreline, but that in itself is a sad inditement of our times, that I would even expect it. 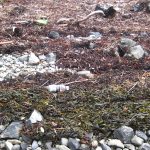 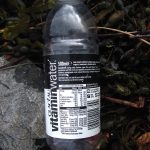 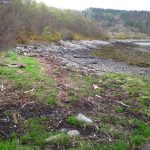 Looking back on my walk.

What got my goat in particular was this Vitamin Water bottle. Someone was conned into paying good money for this rubbish. When I checked the contents is was basically water, sugar and added vitamins. I ask you, what is the world coming to when we have actually been duped into buying this stuff and actually believing it is healthy. Not only is it packaged in plastic, read leaking hormone disrupters into your system, it’s an example of pure and utter marketing madness, that flipping well works because someone bought it.

Get your bloody vitamins and minerals from real food and drink plain ordinary water, preferably filtered, from out of your tap. Amazingly the sugar content was fairly low on this drink but many are not and we are being suckered into believing they are good for us, THEY ARE NOT, they are purely and simply another method by which big food companies line their pockets and strip yours.

I’m hosting Films That Transform at the moment which you can read more about here. I’m fired up again about the poor state of the nations diet and how much this contributes to the rising rates of ill health, 1 in 4 people getting cancer, soaring diabetes and dementia. My journey to recovery from ME/CFS has been like a long apprenticeship into all things that promote, support and maintain good health and mental and emotional wellbeing, so I can tell you with some authority that these sort of drinks do not help us heal. If anything they are contributing to illness.

Ok time to move on. This lovely little burn flows into the next bay where I also saw my first sea pink in flower. Many are in bud now and soon the shore line will be covered in these little bursts of delight.

Next I tackled several of the little rocky islands. This meant picking my way over the sticky clay and shell shore and then virtually crawling my way up the very slippy seaweed to the dry clear stone tops. I felt that since I am walking the shore line and I could, I had to tuck each of these little rocky islands, under my belt. I fell twice and bashed my elbow, poor me, but I made it. 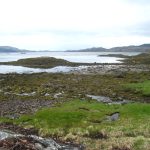 One of the wee islands. 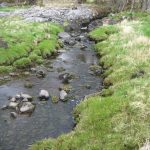 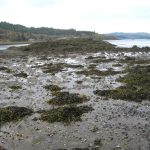 Looking back from the island.

Luckily I spotted them in enough time to give them a wide enough berth. Sticking out of the seaweed were loads of pointed metal sticks. If you look carefully at the picture below you can see just how pointy and dangerous they were. Given how slippy the seaweed is these really are a hazard. Fortunately I doubt many people walk this way, but should you think abut it then beware. I’m guessing it is something left over from the road building, but who knows. 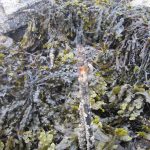 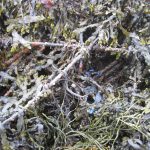 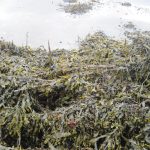 Spikes through the seaweed.

The next section lay below the road and was covered in seaweed so took a while to get along. As luck would have it I then came out into this little bay complete with a pier. Does anyone know what this is all about. It doesn’t seem wide enough to have been a ferry point, so who built it and why?

A river of old tarmac flowing down the rocks shows again how we think over there, down that slope, is away, I will never know! 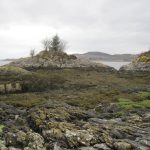 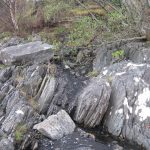 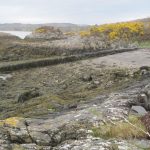 If you have ever sat at the Creagan Inn you will no doubt have noticed the little island off shore to your left. It is a delight. Not only have several different types of tree made it their home, including a couple of cherry trees, there is heather and blaeberries, it’s a mini woodland. 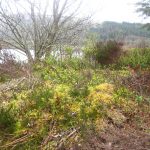 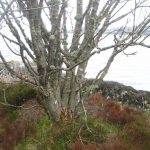 Heather circle round a tree. 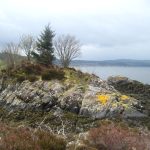 Best of all though, big excitement, out on the loch side of the island I found this, a nest. I deduced it belonged to the Oyster Catcher who was by this time screeching and continuously circling the island. I made a hasty retreat and found a place to sit on the other side where I could still enjoy the view and the Oyster Catcher was able to calm down. 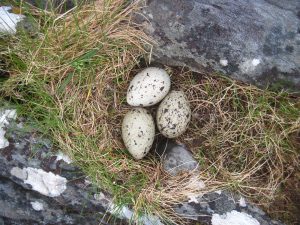 For my last leg I wandered along the Creagan Inn bay and back as I waited for my husband to come and collect me. If you want drift wood for anything this is the place to get it. I found a board which will be useful in the garden as well as another piece which I will use to hang felt. 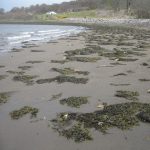 Tide out at the Creagan Inn bay. 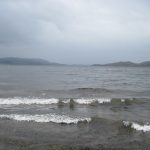 Looking down the loch. 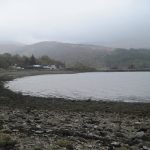 Looking back to the Creagan Inn.

So concludes another walk along the shore-line of Loch Creran.

Where are you walking?

"A miracle is simply something that is impossible from an [...]