What a glorious walk I had this week, deeply aided by the lack of wind and rain. The contrast looking down the MRC pontoon was incredible compared to last week. You can check out the video here.

The first section was along the gravel beach where there are several fish farm pens laid out along with piles of chain and cable which I assume are something to do with anchoring these farms in place. Fusion Marine who make the farms ship them all over the world now. 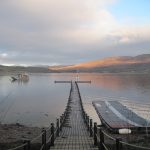 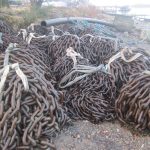 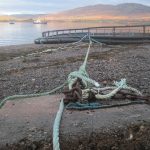 I personally am a bit dubious about all this intensive fish farming especially if it involves feeding fish to fish……that seems mad to me. Catch one species in huge numbers, process it using valuable resources to feed it to another species which produces less kilos of fish than you caught in the first place, but maybe I misunderstand!

Perhaps it’s a good thing that Fusion have diversified into other areas with their recycled plastic products since fish farming does not strike me as a sustainable business which will figure highly in the future of human life on earth.

Fish farm thoughts over I then had to cross Abhainn Teithil, the river which runs down through Sutherland’s Grove. I was fortunate enough to find another old railway bridge, not far inland, but was a little hesitant about crossing. As you can see from the picture the middle of the bridge is now a mini woodland. I chose the sidle-along-the-metal-edge method to cross. 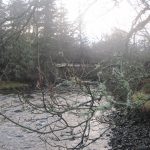 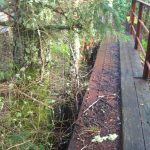 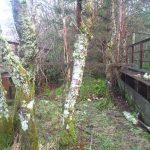 Tress growing in middle of the old bridge.

Along this walk I came across several concrete posts with the stumps of wooden poles sticking out of them. I think they are old electricity poles. Around the first one lay the remains of some of the porcelain insulators.

Next curiosity was all the tree stumps around the river mouth. They look like they have been there for a while, but oddly several seem to be below the high water mark. It seems that this area must have looked quite different at some point in the past. 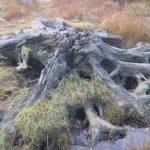 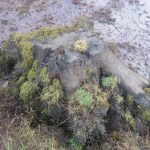 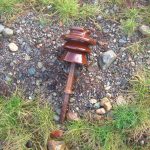 After crossing another river, fortunately narrow enough for me to leap across, I had the piles of rocks which shore up the road to negotiate. I have got used to the sounds of nature on this adventure so cars and lorries zooming by felt unpleasant.

At the end of the next bay is another wee burn where a track comes down off the road. I’ve seen camper vans and tents here and it would be a lovely spot if it wasn’t for all the rubbish. Honestly what are people thinking in this day and age! Check out the photo below and see just how many things you can spot, chucked in the bushes. I’ve said it before and I’m not ashamed to say it again, THERE IS NO AWAY. 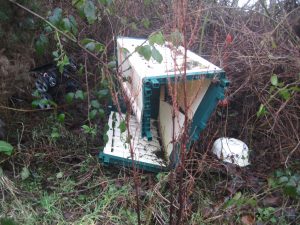 The next section was very rocky, I found it hard going and strenuous as it was so slippy. Even with my pole to steady myself I still managed to slip a few times. Along the way there were several mussel farm floats washed right up into the tree line.

Just by my tea-break spot was obviously a perfect rock for cracking open shells as well as enjoying the views. 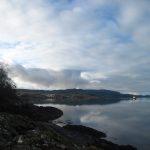 View back towards MRC where I started. 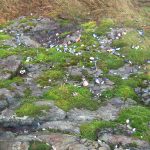 Where the birds crack shells. 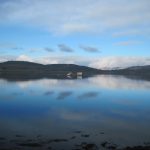 View across the loch.

As I sat there a seal popped up to have a look at me which was lovely, but what happened next took my breath away, it was so stunning. An oyster catcher flew past very low over the water. The loch was so still that the bird was perfectly reflected so it looked like two birds flying together wings almost touching. The reflection was so clear my brain was slightly scrambled trying to work out if I was seeing one bird or two. It was one of the most beautiful things I have seen in a very long time, and over in seconds.

Life, is it not? The most precious, most treasured moments are often fleeting and short-lived yet mark us with something indelible that endures, a memory which travels with us from then on.

The next bay was close to the road again and involved some climbing over boulders.  At the end of the bay I found a ring in the rocks, why is it there, what is it for? There was nothing else to indicate or even hint at why. I also came across several old road edge markers no doubt cast onto the shore when the new road barrier was put in place. Another case of chucking stuff away! 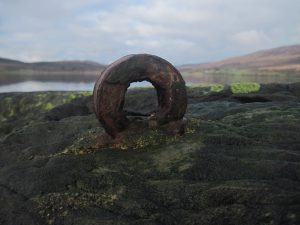 Ring in a rock.

The rocks I crossed to get to the next bay were the toughest yet. There is a little house on stilts in this bay, what a great spot, with tremendous views down the loch. On the shore I found an old bottle from Edinburgh, ESS Coffee & Chicory by Symington & Co. A quick internet search threw up this article which says the company was still going in 1975 when it was sold. 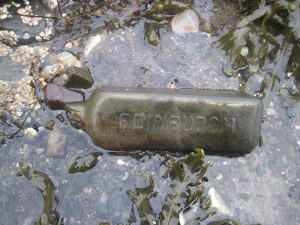 The next outcrop of rocks took me away from the road again towards a little group of rocks south west of the last bay before the Creagan Bridge. The Admiral Chart 2379 names this as Black Rock, not terribly imaginative but none-the-less accurate.

Along the way I saw a couple of Cormorants ( maybe Shags) diving in the water, another delight.

These rocks are home to a colony of seals, seeing them would have been excitement enough but there was an eagle perched there too. I gingerly crept along the rocks as stealthily as I could but the eagle took flight firstly to the next rocks and then it headed off towards the other side of the loch. I’m pretty sure it was a sea eagle, great excitement!

I made my way over the seaweed as close to the seals as possible and sat and had my second cuppa. At one point there were eight of them all swimming about having a good look at me. You can watch a short video of them here. What struck me was how the eagle and seals had been happily co-existing till I came along, neither seemingly bothered by the other but both disturbed by me, human person. 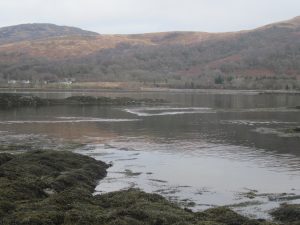 Seals swimming by the rocks.

Whilst we do live along side some creatures they are mostly domesticated or farmed, wild creatures steer away, they are frightened and wary. I felt sad that I could not sit there as part of, I was definitely apart from. But this is where we have come to, us humans, we live apart from nature, as if we are not connected to it, yet how can we be anything else, we are all together here on this one place called earth.

It is a madness to think we can somehow rise above that, live separately from what we actually are. We are another animal on the planet, one like all the rest who’s needs were provided for and met from everything around us. Indigenous people still remember, still know that way of living, where it is in harmony with all that is, but we in the west have forgotten. We have taken a terrible turning up a dead-end which is bringing nothing but death and destruction. The sooner we get this show turned around and heading somewhere that is about earth-care, people-care, fair-share the better. 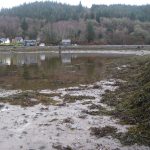 Muddy bay before the Creagan Bridge. 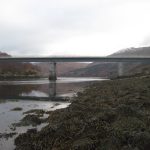 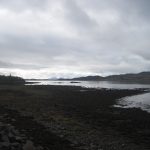 Looking back over the Black rock all the way down to the mountains on Mull.

The last bay before the bridge turned out to be like the one in front of my house, sticky mud with clay so I stuck to the edge till half way round where it became quite firm sand. In the bay there are two of the old electricity pole stumps. I’ve often driven past and wondered what they were, now I know!

So ends another walk., another reflection on life.