As I left home for this walk it was absolutely pouring with rain, overcast, grey and rather dismal and I expected to get wet, but as luck would have it the rain stopped and hardly put in an appearance until the end.

I was able to leave from home today. I took my usual route to the shore through the oak woodland, down the track to the little bay in front of Pony Park.  The local oyster farm influences much of this shore-line.  Around the bay there are piles of mesh bags and tubes and an old trailer slowly disappearing into the grass. I don’t know who they belong to, the current owners or past owners of the oyster farm and will they ever be used again or have they been abandoned? 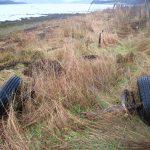 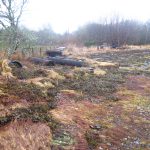 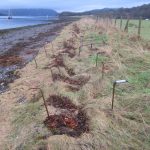 As my walk continued I was to come across the odd mesh bag or tube, old racks and various other items of unknown identity. I have to say it made me think, are these all abandoned to nature or will someone eventually come and clear them all up?

If abandoned, then mother nature is being asked to absorb them into what she is. But how long can she keep on doing this? Like those solutions I swirled in chemistry classes many moons ago I am assuming she will reach saturation point and what then?

Some would say we are already there. We know the oceans are full of minuscule bits of plastic, heavy metals and other toxins which are killing the creatures who live there, why would we continue to ask them to absorb even more?

We still act as if there is an away, as if somehow if it’s out of sight then it is out of mind and we don’t need to take any more responsibility for it. WRONG!!!!  Every single one of us is slowly being poisoned without even knowing it and our lands and seas are being polluted with more and more toxins.  It doesn’t go away, it doesn’t miraculously get transformed into something harmless.  I once read a book called The World Is In My Garden which asked us to consider how we would behave if we had to dispose of all our waste within our own gardens. How would we?

The vehicles from the oyster farm come along this section of shore and over time have flattened out a track which I usually walk along as it is much easier to negotiate than the rocks and pebbles. I past some old alders clinging to the ground, roots all exposed. In the spring there are lots of primroses around here which I pick for salads, and by the burn I am reminded of days gone by watching my children dig clay out of the bank for some project or other. There are clay seams all over this area. 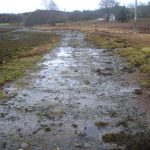 Track made by Oyster farm vehicles 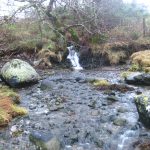 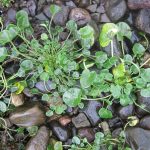 I also found what I believe is Scurvy Grass once eaten by sailors to ward off scurvy. It has an extremely strong flavour which could be off putting but Galloway Wild Foods reckon it is worth considering as a foraged food.

The next thing I came across looked like the remnants of some structure which protruded into the sea. I wonder if it was a pier but more likely an old fence line as it runs directly down from the rather tumble down stone dyke in the field. 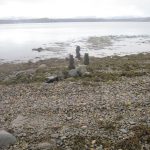 Remains of something in the sea 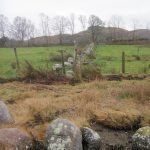 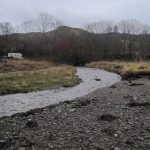 Soon after I encounter my first real obstacle to negotiate if I wished to continue. Normally this river marks the end of how far I walk and I scramble up to the old railway line to walk home. Today I checked whether I might cross nearer the sea but it was running far too fast and deep so I went up to the old railway bridge hoping to get down the other side and carry on. Unfortunately my way was barred by lots of gorse and then the oyster farm depot so I had to make my way along the old railway track till I found a suitable spot to get back down to the shore. I didn’t like not being able to stick to the shore line.

From here I walked the shore heading for the Quarry pier.  Part way along there is a fence going all the way into the sea, and still maintained as can be seen from the roll of fairly new looking wire at the sea end. It seems a bit odd to leave it there but what do I know I’m no farmer! Thankfully the tide was out enough for me to get round the end.

A couple of pallets and then two lobster pots marked my continuing walk.  These pots may or may not still be in use. I  imagine that maybe whoever uses the caravan at the back of the field may lay these pots.

I could see why the fence went into the sea here because unlike the rest of the walk this field is open to the shore. The only animals in the field though were geese who took off as I got closer. It was very fascinating watching as they circled around, out over the sea, and how very quickly they got themselves into formation. 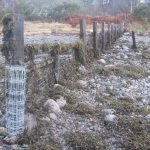 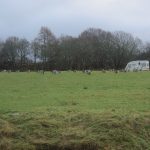 Geese in the field 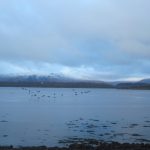 Geese getting into formation

At Rubha Garbh, during the 1700’s a ferry ran from here across the loch. Now this is the office and pier for the Glensanda super quarry.  I checked in with the office to let them know I was crossing their land and was shown where I could scrabble down to the shore. The quarry can only be reached by boat, and it must be one of the more unusual commutes in the UK, leaving this pier to head out of the loch round the north end of Lismore island and then over to Morven.

Again I was fortunate with the tide as this section would have been inaccessible at high tide and it turned out to be a truly lovely walk along the gravel to the entrance to St Columba’s Bay. This bay mostly dries out at low tide apart from a couple of rivers that can be seen meandering their way out to sea. 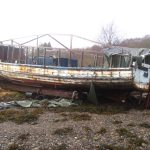 The oyster farmers have their depuration site here. Depuration is the process where marine animals are placed into a clean water environment for a period of time to allow purging of impurities. I guess that explains all the pipes going back and forth to the sea and tanks. Since Loch Creran is a protected loch I doubt they need much cleaning. You can order oysters to be delivered from here, I can testify to their deliciousness. Also of interest here is The Duchess. I’ve heard that Hugo plans to sail away in her one day, though I’m doubtful of the efficacy of that plan.

I stopped for a cuppa on a little rocky outcrop on the beach and enjoyed the familiar, but from a slightly different angle, views up the loch. From here I watched a cormorant diving, a couple of oyster catchers wandering and some gulls floating about. 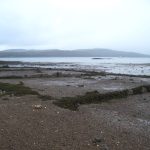 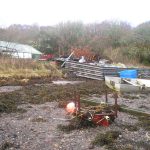 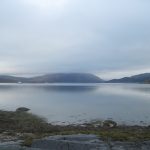 View up the loch.

Once past the depuration site there are the remains of some low walls in the gravel and mud. Does anyone know what these are, fish traps, salt pans?

After following the bay for a while I was forced inland by a river. It was too deep to cross and judging by the gravel banks must be a lot deeper at times especially when the tide is in. To cross the river I was forced back onto the old railway and over a bridge. After clambering back down I found this bone I can’t for the life of me make out what it is, can anyone else? 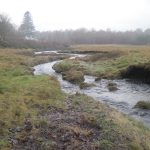 The river flowing into the bay. 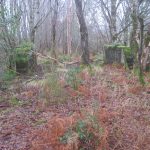 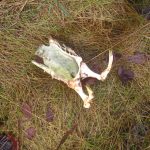 I ended my walk by the Twisted Wheel Cafe and Argyll Pottery. Interestingly the OD map shows the pottery as being on the other side of the road from the bay, did it move?

I thought some of you might be interested in reading more about Loch Creran. There is a particularly enchanting book called Loch Creran, Notes from the West Highlands, written by W. Anderson Smith, published in 1887. The link is to an on-line copy of the book. William lived in a cottage very near this bay and wrote in detail about the natural world he encountered in and around this loch.

In this extract from January 1883 he is talking about the mild weather:

“But we are still in the middle of the winter in moist Benderloch, although it is almost impossible to credit the fact. Now that the weather is calm and dry, the extreme mildness tells more forcibly. It is not enough that primroses are full blown all around our dwelling, that birds in the stricken woods are singing as merrily as in the open spring time, but all nature is out of joint and staggering about, like a schoolboy awakened during a moonlight night and told that it is the morning.”

I find his use of the word moist to describe Benderloch most amusing given the weather of late and although there are currently no primroses in bloom I am sure many of us will resonate with the idea that nature is staggering about. 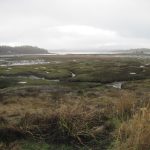 View across the bay.