Dah nah! Glorious sunshine all the way for this one. 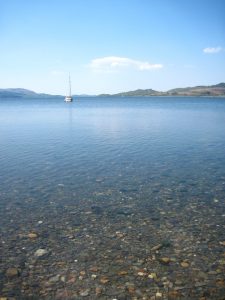 I began gazing into the crystal clear water of the bay. It seems that no matter how many times I see such calm clear waters they never cease to delight me. Looking across towards the yacht on the Inn’s moorings I am whisked back to my family’s time living aboard our yacht. I feel envy, gratitude, and a longing for that simple life again. Family homes with gardens, garages, and sheds are toooooooo big and filled with way tooooooo much stuff for my liking.

Says she with her laden bag just for a walk. Stuff and me we have an interesting relationship!

But back to the walk; there were no big rocks to climb or scramble over, yea!

Yip this walk was easy compared to most, a pebbly shore with a few rocky patches. As I ambled along the first stretch I watched with surprise as a paddle boarder came into view. They were heading off way down the loch. I don’t normally associate paddle boarding with the West Coast of Scotland having originally seen them in Australia, but hey ho, it seems they are here. 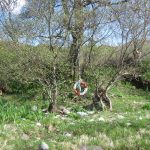 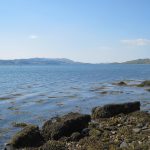 View from the holiday homes, with black speck of paddle boarder to the left of the picture. 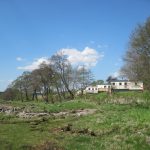 I passed the Appin Holiday Homes site. What a fantastic place to come for a holiday, the views down the loch are truly splendid, there’s a wee burn, a lifebuoy swing in the tree, what more could you ask for?

Dotted all along this shoreline were various forms of garbage. Interestingly metal featured highly this week, which I don’t feel so bad about. At least it breaks down into minerals unlike plastic which breaks down into, oh yea, plastic, just smaller and possibly much more of a problem if our seabeds are anything to go by.
Apparently not only have we now polluted the oceans of the world with minute bits of plastic it is currently building up in the very air we breath. God only knows what that will do to our lungs and those of every other living creature we share our planet with.

I am trying to make the conscious choice to reduce my relationship with plastic, but it’s not easy and sometimes impossible. However I believe its better to at least try than to accept this deluge and it’s future impact on our decedents and the planet. Much of what we are handing on is already poisoned and polluted so lets try and at least mitigate how much worse it could be. 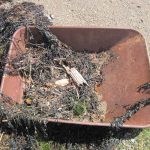 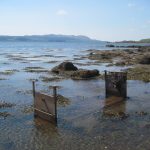 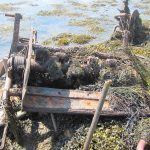 Future generations will struggle with so many issues caused by this crazy oil fuelled industrial age. They will look back in horror at the way so many of us lived and the legacy we are leaving. I don’t want to be one of the people they feel let them down. I want to be one of the ones that my descendants say, “ she tried to change things, she made an effort on our behalf.”

How awful it would be to be asked, what you did to help turn around the huge destruction machine of global corporate greed only to say nothing, I actually added to it.

So rubbish, there is no away, you’ve heard me say it before; so mussel farm owners go and get your floats, there are loads of them all along the North Shian shore line, it’s like a graveyard. At the very least re-purpose them, but please don’t just leave them to disintegrate.

Although I have encountered the odd crop of metal rubbish abandoned to nature during these walks, this week there was loads of it. An old wheelbarrow, what looked a bit like a bedstead, old farm machinery and a fender set! 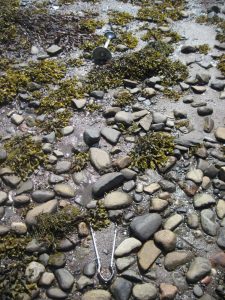 Most of this was already well rusted and beginning to disintegrate. I may be incorrect here, but it strikes me that metals at least break down into minerals which I don’t think are as harmful to the environment. However it would still be better to at least recycle them.

Shortly after all this rubbish took my attention I reached a river mouth. It turned out to be a doddle to cross, thankfully. As I reached it the paddle-boarder was beginning their return journey. Now with the wind head-on the standing graceful glide of earlier had become an on-knees hard slog. I was so glad to be on shore with the wind at my back. 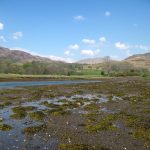 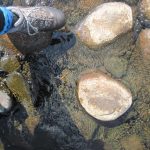 Hopping across the river. 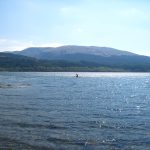 Next I found this sculpture. At first glance it looked like the sort of alpine bowl some people have in their gardens, but no it was another beauty-by-mother-nature art installation where she works with what is to create something stunning. 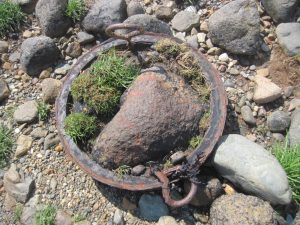 Time for a toes out, white winter skin exposed break next. I managed to hunker down behind a huge boulder to shelter from the now pretty strong wind, and there with the sun on my face I had a little snooze, heavenly. 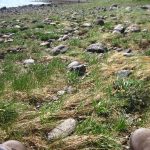 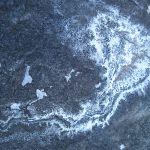 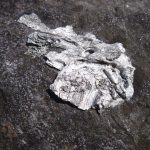 Upon rising I spotted two strange but beautiful things on the boulder. One was the salt art left after a puddle had dried and the other this odd something that looked like a piece of melted silver stuck to the rock. Does anyone know what on earth it could be?

A dilemma next. Do I take the map marked farm track back up to the road or do I carry on and hope for some other opportunity to reach the road? 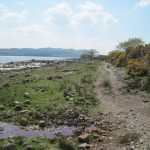 Farm track along the shore. 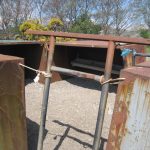 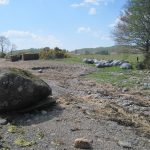 I carried on and past a very interesting farm structure, it looked like it was made out of huge old metal water tanks or perhaps fuel tanks of some sort. They were formed into a corral and seemed to be a feeding point of some sort, recycling at last, how heartening.

My walk ended at a bay with oyster beds. On the far side is a spit running out to the loch so I could place myself on the map. If you follow 43 degrees on the Oban & North Lorn Explorer 376 map you will see said spit. 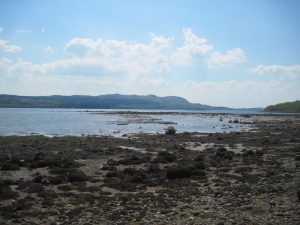 View across the spit and down the loch.

Fortunately there was a farm track here down to the Oyster Farm paraphernalia so making my way to the road was easy apart from giving a herd of cows a wide berth and wondering if the farmer in his red tractor might tell me off. He didn’t, instead we exchanged a friendly wave as he continued rolling something over his gorgeous daisy filled field.

This farm is North Ardnaclach and I have to say I was extremely impressed by its superb neat hedges. 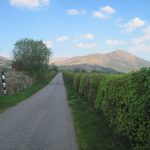 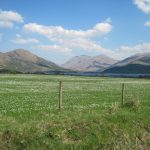 View from the farm. 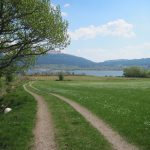 Looking down to the shore.

My husband was setting off to come and collect me so rather than just wait I walked back along the North Shian lane. The hedgerows were stunning, beech, hawthorn, honeysuckle and holly in their spring glory with stichwort and violets below, truly delightful.

I love walking speed, human speed, you get to see things that simply pass you by otherwise. You can connect with the detail rather than only engage with the larger view. 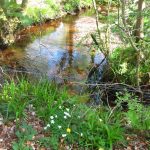 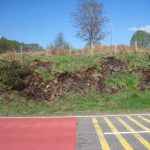 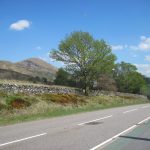 Eventually I reached the main road, the A828 which takes you to Fort William. I started to follow the cycle path and noticed this burnt patch of ground, I’m guessing someone threw their cigarette out of the car window, dangerous, and fortunate that only this little patch went up.
The finale to this walk, incredible moss mounds on the other side of the road. The photo really does not do the colours justice. You might just have to go and see for yourself!