Tested, what are you assuming that means?

Imagine if you will, a virus so dangerous, you have to be tested to even know that you had it.

My son had mumps when he was a young child. It seemed obvious to me because he looked exactly like my sister did when we had it as children. So, I assumed the worst and called the doctor.

I was told to bring him in…eh wait a minute. He may have an infectious disease, are you sure? Correction…we’ll send the doctor on a home visit.

The doctor arrived and agreed with my assumption, this hamster-faced child was indeed a case of mumps. He duly recorded the diagnosis in his notes.

Mumps is however a notifiable disease, doctors have a statutory duty to inform their local health protection team about any cases. An assumption of illness is not enough, it has to be tested. Interestingly I had to jog the doctor’s memory regarding this point.

He did have mumps, but was he infectious?

The NHS website has this to say about Mumps. “A person is most contagious a few days before the symptoms develop and for a few days afterwards.”

So, symptoms have some importance in determining how infectious a person may be. Alongside a positive test which confirms the presence of the virus you become a Mumps case. In other words my son was infected with the paramyxovirus which caused the symptoms we classify as Mumps.

Why then are we considering people who test positive for SARS CoV-2 virus to be a Covid-19 case when they have no symptoms?

This is strange. There seems to be a misleading classification error afoot. You can read more about it in this article by Dr. Malcom Kendrick.

If an IgM antibody test was done he would hopefully show antibodies to Mumps confirming what most of us believe and the NHS states, “Once you’ve been infected by the mumps virus, you normally develop a life-long immunity to further infection.”

What about the Mumps PCR test? This looks for RNA related to the virus. Since he had the disease so long ago we do not know if any fragments of the paramyxovirus could still be detected. If they were it would be a positive test. Would he then be considered infectious?

I imagine most of us would laugh at that idea. So when did he stop being infectious? We do not know for sure, but probably a few days after his symptoms appeared i.e while he still had detectable virus in his system.

Ok so now lets turn our attention to the current coronavirus time where a PCR test is being used to detect the presence of SARS C0V-2 virus. What does this tell us?

This question and many more relating to these PCR tests have been researched by The Centre for Evidence Based Medicine (CEBM). They have analysed tonnes of research regarding testing which the curious and dogged can read here. One research article titled  PCR positives: what do they mean? States:

“PCR detection of viruses is helpful so long as its limitations are understood; while it detects RNA in minute quantities, caution needs to be applied to the results as it often does not detect infectious virus.”

There are several interesting graphs in the article, this is of particular interest. 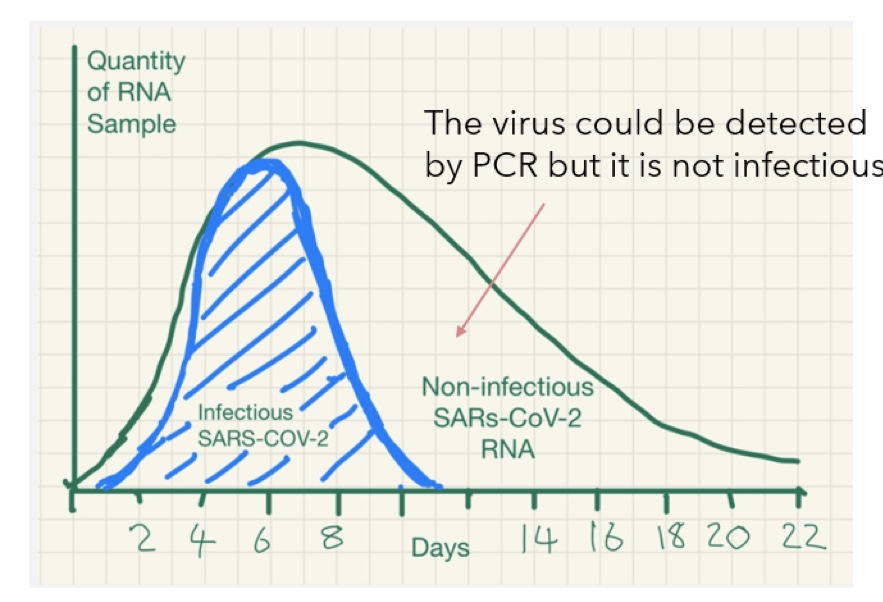 “The shaded area shows that up to X days, i.e. 10 days approximately after infection, the virus is infectious. But then the virus is still present many days after. This could result in PCR positive but it does not mean that the virus is virulent or infectious, rather it means that residues and “non active” viral RNA is still detectable by PCR.”

Indeed, their whole article is worth reading in light of the current testing bonanza.

They do not know

Our Governments in the UK are currently acting as if every positive test for Coronavirus is an actual infectious case. This is simply not true. They actually do not know who is infectious and who is not. Without doing viral culture testing to check infectivity or virulence they have no idea.

Indeed an Off Guardian article titled COVID19 PCR Tests are Scientifically Meaningless questions the whole premise upon which the PCR test has been used, concluding that they are meaningless as a diagnostic tool.

Our Governments seem to have ignored all this. They have assumed people are infectious and used that assumption as sufficient evidence to continue the devastation and damage caused by lockdowns, self-isolating regimes and the ever changing rules and regulations about our daily lives.

Perhaps it could be argued that is necessary if this virus was indeed deadly and spreading like a plague. It is not.

A recent Office of National Statistics report for August 2020 tells us that:

So what is my point:

I will finish by sharing from my Reflections on Fear blog written in mid May.

Some people have cause to be frightened. They fall into vulnerable groups where they may risk death if they encounter the virus. The vast majority of us will not. The Chief Medical Officer in the UK, Chris Whitty recently explained 46 mins into this briefing, that,

“A significant portion of people will not get this virus at all, at any point in the epidemic….of those who do, some of them will get the virus with no symptoms at all.

Of those who get symptoms the great majority, probably 80% will have a mild or moderate disease. It might be bad enough to go to bed for a few days, not bad enough to have to go to the doctor.

An unfortunate minority will have to go as far as hospital, but the majority of those will just need oxygen and then will leave hospital. Then a minority of those will end up having to go to severe end critical care and some of those sadly, will die. But that is a minority, 1% or possibly even less over all.

It didn’t sound that bad then, how much better is it now?  A lot I think.