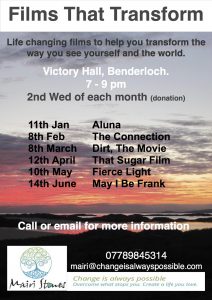 I believe we need to change the way we live on our beautiful planet to give any hope of survival to future generations and to lessen the impact we are having on the rest of life on earth.

It’s too easy to say that what I do as one small human being doesn’t matter and to point the finger of responsibility towards big global corporations and Governments. As Chris Jordan the filmmaker says we have a:

I believe in hope and that the more of us who believe that what we do and how we live matters the better a chance we have of changing things. To this end I am showing a series of films which help us  understand the importance of who we are and what we do, how our understanding of the interconnected of all things is at the route of not only our own healing but that of our planet.

The film screenings will be held in the Victory Hall, Benderloch 7-9 pm on the 2nd Wednesday of every month January to June 2017.

Entry is by donation and each film will be followed by a period of sharing and discussion.

11th Jan 2017 – Aluna: The Kogi tribe a genuine lost civilization hidden on an isolated triangular pyramid mountain in the Sierra Nevada de Santa Marta, Colombia say that without thought, nothing could exist. This is a problem, because we are not just plundering the world, we are dumbing it down, destroying both the physical structure and the thought underpinning existence.  They are profoundly frightened by what we are doing to the world, but also well aware that we have no understanding of the forces which we are unleashing. They believe that the only hope of survival for mankind is if we can learn why they are so scared, and they know that we will only believe what we can see, so they made this film.

8th Feb 2017 – The Connection, Mind Your Body: The film features scientists, researchers, writers and doctors, as well as remarkable true stories of people adding mind body medicine to their healing toolkit to recover from severe back pain, heart disease, infertility, cancer and multiple sclerosis. While the science is complex, the solutions for people suffering with illness are astonishingly simple. The film shows that we can counter the harmful affects of stress with an equally powerful relaxation response triggered through specific techniques such as meditation. It shows that emotions can impact the course of an illness for better or for worse and could even be the difference between life and death.

8th March 2017 – Dirt, The Movie: narrated by Jamie Lee Curtis this film brings to life the environmental, economic, social and political impact that the soil has. It shares the stories of experts from all over the world who study and are able to harness the beauty and power of a respectful and mutually beneficial relationship with soil.

12th April 2017 – That Sugar Film: One man’s journey to discover the bitter truth about sugar. Damon Gameau embarks on a unique experiment to document the effects of a high sugar diet on a healthy body, consuming only foods that are commonly perceived as ‘healthy’. Through this entertaining and informative journey, Damon highlights some of the issues that plague the sugar industry, and where sugar lurks on supermarket shelves. THAT SUGAR FILM will forever change the way you think about ‘healthy’ food.

10th May 2017 – Fierce Light: In these times of crisis is change possible? This film is the revelation of a new global movement of movements of positive, compassionate action. Fierce Light illuminates what is possible when human beings are their absolute best….a human sunrise.

14th June 2017 – May I Be Frank: Frank Ferrante is 54, weighs 290lbs., had a lifetime of drug & alcohol abuse. He’s on multiple medications including anti-depressants, undergoing chemo and drinks 10 espressos a day to stay awake. One day Frank stumbles into Cafe Gratitude, a Raw food café in San Francisco, and meets Ryland, the café’s manager. Watch as Ryland, his brother Cary and best friend Conor, help Frank take on his weight, health, relationships and loving himself in just 42 days. 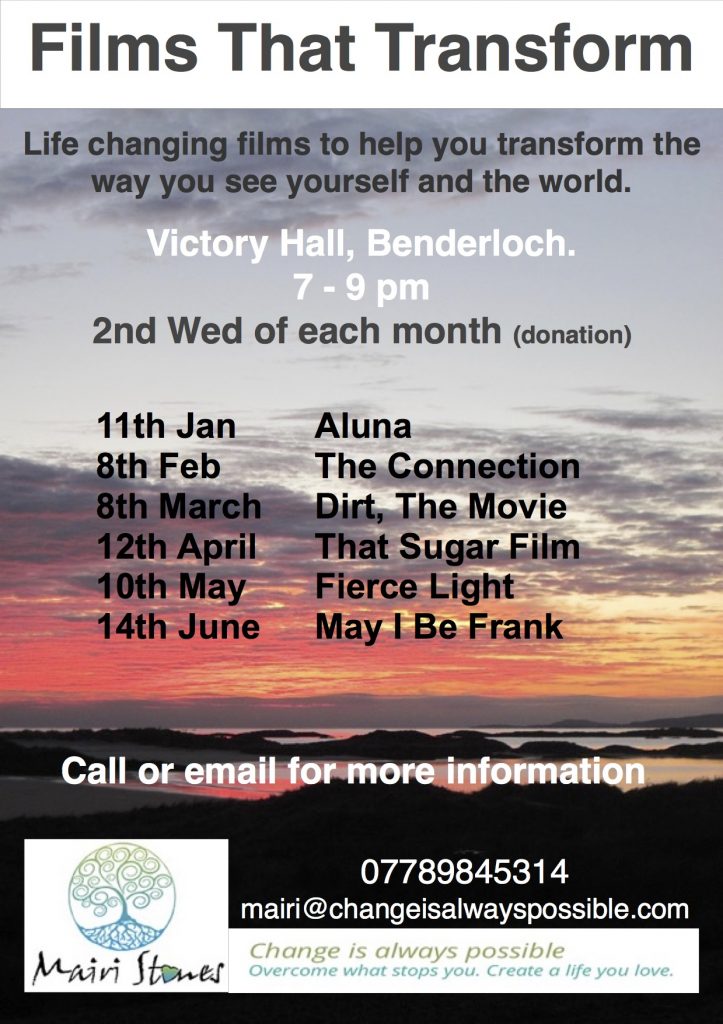